One of the most common myths surrounding electric cars is ‘are they actually good for the environment?’. With many questioning if electric cars are really “greener” once emissions from manufacturing and electricity generation are taken into consideration. This fear that electric cars increase carbon emissions is a damaging myth to their revolution.

Newly announced research from the Universities of Exeter, Nijmegen – in The Netherlands – and Cambridge shows that in 95% of the world, driving an electric car is better for the environment than a petrol car. The only exceptions are countries like Poland. This is due to their method of electricity generation as it is still mostly based on coal.

Researchers say that on average lifetime emissions from electric cars are up to 70% lower than fossil fuelled cars. Countries such as Sweden and France (where most electricity comes from renewables and nuclear) sit at the highest percentage. Whereas the lifetime emissions in the UK is situated at around 30%. That is still a significantly high number. I think that we can all agree that there is still room for improvement. Be sure to know that, all of our EVision cars are re-charged with 100% renewable energy. They are charged from our own solar panels across our 4 UK locations. Meaning that here at EVision we offer true green, zero emission motoring. It is said that the overall percentage of UK emissions will reduce in line with the uptake of electric cars as the nation becomes more favourable to shift to clean electricity. 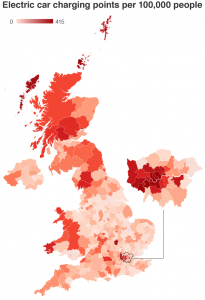 This research projects that in 2050 every other car on the streets around the world could be electric. If this was to become a reality it would reduce global CO2 emissions by up to 1.5 gigatonnes per year. Which is equivalent to the total current CO2 emissions of Russia.

Global movements to electric cars could be much faster if countries adopt stricter targets such as in the UK. Recent announcements show that the UK government has pledged that every new car sold will have zero emissions by 2035.

The study’s lead author, Dr Florian Knobloch from the University of Nijmegen (The Netherlands) states: “The idea that electric vehicles could increase emissions is essentially a complete myth.”

Looking at the bigger picture, it doesn’t mean the problem of cars and the environment is solved. Firstly, it will be difficult to shift the UK’s car fleet to electric in time to meet the 2050 climate goal. 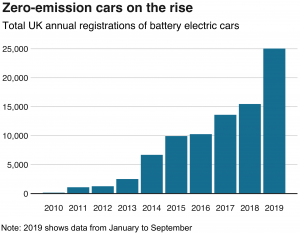 Professor Greg Marsden, from the Institute for Transport Studies at Leeds University, warned: “Electrification is necessary but not enough.” The study mentioned also looks at electric household heat pumps. In which they found also produces lower emissions than fossil-fuel alternatives in 95% of the world.

Why not try an EV?

If you are still somewhat skeptical about electric cars then why not hire one to try? Better off, why not hire an electric car from EVision, the UK’s first and largest pure electric vehicle rental company. We have a wide fleet of pure electric cars available, ranging from the nippy BMW i3 to the luxurious Tesla Model X 100D. All of which are ready for you to hire today. Book your perfect EV rental online with our new booking system. Alternatively, send us a message via our contact page. Our friendly team will be more than happy to discuss how we can best tailor an EV hire to meet your requirements.

Overall, the research concludes that in the majority of countries electric cars produce fewer emissions than fossil fuel cars. This is still the case even if electricity generation still involves fossil fuels. In total 53 of 59 global regions – including all of Europe, the US and China, findings show that electric cars are already less emission-intensive than fossil-fuel alternatives.

More information can be found in the paper, published in the journal Nature Sustainability, is entitled: “Net emission reductions from electric cars and heat pumps in 59 world regions over time.”

Get an electric company car for FREE

The government’s recent initiative to encourage the UK to move to green motoring has taken hold as from April 6th, 2020. The Benefit in Kind company car tax for electric cars will be dropping from 16% to 0%. As of that date having an electric company car for your employees or yourself will offer significant tax savings!

Find out more in the video below.