If you have been lucky enough to drive a Tesla then you will know that they are unparalleled to any other EV. There’s nothing like their exhilarating performance nor the suave and modern curves of the interior and exterior. It’s certain that driving a Tesla will definitely make others green with EV envy. However, if you’re new to the electric vehicle (EV) world then let’s talk about the EV giant that is Tesla. Want to understand our admiration for the automaker a little more, keep reading!

An american electric-automobile manufacturer. Founded in 2003 by American entrepreneurs Martin Eberhard and Marc Tarpenning. Named after Serbian-American inventor Nikola Tesla. Nikola Tesla was best known for his contributions to the design of the modern alternating current electricity supply system.

Tesla Motors was formed to develop an electric sports car. Eberhard was Tesla’s chief executive officer (CEO) and Tarpenning its chief financial officer (CFO). Funding for the company was obtained from a variety of sources. Most notably PayPal co-founder Elon Musk, who served as chairman of the company, beginning in 2004.

In 2008 Tesla released its first car, the completely electric Roadster. 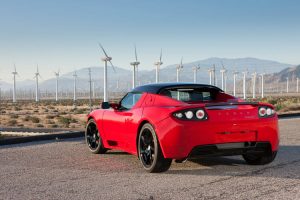 It achieved 245 miles on a single charge in company tests. Additional tests showed that its performance was comparable to many gasoline-powered sports cars. Accelerating from 0 to 60 mph in less than 4 seconds and reaching a top speed of 125 mph.

In 2012 Tesla stopped production of the Roadster to concentrate on its new Model S sedan. Reconstructed, the Model S was acclaimed by automotive critics for its performance and design.

Unlike the Roadster, where the batteries are at the front of the car, the Model S has its positioned underneath. This gave the EV extra storage space in front (commonly known as a frunk). Additionally, it improved handling due to its low centre of gravity. This amendment to design has revolutionised the game as far as electric cars are concerned. Offering high class interior, futuristic computerised controls, comfort and a powerful battery train, it is a popular choice for any car enthusiast.

The well renowned Tesla Autopilot, a form of semi autonomous driving, was made available in 2014 on the Model S (and later on other models).

Model S’ available from EVision include:

Fancy taking a look at this EV? View our promo video to see this supercar in action.

In the early stages of 2012 Tesla built stations called Superchargers in the United States and Europe. These were designed for charging batteries quickly and at no extra cost to Tesla owners, (something that you can still benefit from with any hire of a Tesla from EVision*).

Tesla released the Model X, a “crossover” vehicle (a vehicle with features of a sport-utility vehicle but built on a car chassis), in 2015. 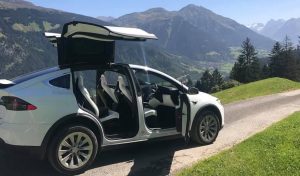 With seating for up to seven, the Model X offers the most storage room of any SUV in its class.

Alongside this EV launch, the Model X was the first car from this automaker to have double hinged gull-wing doors. Professionally known as falcon-wing doors. These are equipped with sensors to monitor the proximity of surroundings, and can open in even the tightest parking spaces.

Model X’s available from EVision include:

Tesla Motors also branched out into solar energy products in 2015. This included a line of batteries to store electric power from solar energy for use in homes and businesses. Tesla bought the solar panel company SolarCity in 2016. Later in 2017 the company changed its name to Tesla, Inc. to reflect that it no longer sold just electric cars.

There’s no secret that any Tesla will put you back a pretty penny. However, due to the high demand for a more inexpensive vehicle, the Model 3, a four-door sedan began production in 2017. This EV is one of our most popular vehicles available at EVision and all those who drive it are smitten. Packed with the latest technology, the Model 3’s simplistic interior is unlike any other on the market.

Model 3’s available from EVision include:

View our Tesla Model 3 features video to see this impeccable EV in action.

Why choose to drive a Tesla?

Tesla is leading the electric vehicle race with their high-powered battery technology along with taking more risks. For more than a decade, Tesla has been designing battery-powered vehicles. Working from the ground up and using software to make the batteries more efficient for us drivers. Over the course of time they have analysed and scrapped many weighty, traditional luxury features in favor of aerodynamics (something that makes a huge difference to mile range). Such as ditching multi-gear transmissions in favor of dual motors programmed to send varying power ratios to the front and rear wheels.

You may be wondering what multi-gear transmissions are? Simply put, it’s one of the biggest differences between electric and conventional internal combustion engine (ICE) cars. It is all to do with the drivetrain. More details on this can be found in a previous blog post.

People choose to drive a Tesla not just for their battery range but for their esteemed history in the EV market and their world leading features. For example; Autopilot, which steers the car on highways and executes lane changes. The cars are also less visually jarring and are lusted after by most drivers on the road. Aside from Autopilot, ludicrous acceleration, and supreme safety, Tesla has several other tech advantages that you will love when you drive a Tesla. The gigantic navigation / infotainment screen, music & radio options, software updates, smart suspension, self-presenting doors, falcon-wing doors. The list goes on and on…

Want to drive a Tesla as a company car?

We know that you are interested in driving a Tesla, let’s face it who wouldn’t want to? So, if you’re looking to ditch that gas guzzler for an electric company car then EVision is here to help.

As of April 6th, 2020 the government’s initiative to encourage the UK to move to green motoring has taken hold. These tax savings are a commitment to increase electric vehicle adoption across UK roads in order to meet climate change targets, and ensure cleaner air quality. The Benefit in Kind (BiK) company car tax for electric cars has dropped from 16% to 0%! Having a Tesla as an electric company car for your employees or yourself will offer significant tax savings.

This means that in most cases, the tax savings will actually pay the rental charge of an EV from us, giving you a FREE company car!

Further benefits of hiring a Tesla as an electric company car from EVision:

Find out more, by watching the video below.