The new reveal of the Porsche Taycan Turbo will apparently rival the likes of the Tesla Model S P100D. Since its introduction Tesla has remained unchallenged in the luxury electric vehicle market. They pioneered the drive of upscale performance EVs, benefiting them, as competitors could not catch up. Remember the old saying, the tortoise always wins the race? Could the Porsche Taycan and Tesla Model S be another example of the tortoise and the hare?

The performance on both of these EVs are highly impressive, here is the rundown on each one and a comparison.

The original Taycan Turbo has an estimated range of 281 miles and the Turbo S has a lower estimated range of 261 miles. In comparison, the Tesla Model S can drive a staggering 311 miles on a full charge. If range is a big player in your choice, the Model S P100D wins this round by miles.

Let’s talk speed. The 0-62mph rate sets the difference between the two models, with the Taycan Turbo accelerating in 3.2 seconds and the Turbo S in 2.8 seconds. The Taycan Turbo also comes with launch control! Not that this is something you need or use on your everyday commute but, it’s there if you fancy giving it a go on a race track. The Tesla Model S P100D has an impressive 0-60mph rate of 2.28 seconds, meaning that yet again the P100D comes out on top. Both models of the Taycan Turbo hit a maximum speed of 161mph, whilst the P100D’s max speed is 155mph. In this case the Taycan Turbo takes the win in the top speed sector but the Tesla Model S P100D wins the 0-60 acceleration rate.

The Turbo and Turbo S are both dual motors with 93.4kWh batteries, whereas the S P100D is also a dual motor but with a slightly more powerful 100kWh battery.

So, the round up from the performance round is:

The exterior is the first thing you see of an EV, meaning that first impressions definitely count in this case. Both the Porsche and Tesla are classed as supercars, meaning this could be a close round!

Beauty is in the eye of the key holder, here at EVision we absolutely love the Tesla, it is a timeless classic. With a body of stylish and sophisticated curves complemented by futuristic and modern enhancements, the P100D is the perfect blend of an adult toy and functionality. However, the Porsche is aggressive yet elegantly sporty so who knows, could this EV fit in with our fleet here at EVision?

Size is an important and practical factor when it comes to choosing a vehicle, both EVs come in at very similar sizes. The Taycan is the smaller vehicle but only by a smidge, L 195.4” x W 84.4” x H 54.3” whilst the S P100D comes in at L 195.7” x W 86.2” x H 56.9”. The main difference between the two is the space offered in the trunk. Thanks to Tesla ‘s hatchback design, it offers a significantly larger trunk at over double the size. However, the Porsche does offer a slightly larger trunk, and we mean slightly at 2.8 compared to Tesla’s 2.1 cu.ft.

Wheel type and size can differ the acceleration rate, mile range, handling, aerodynamics and top speed of the EV. 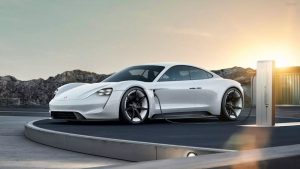 So, the round up after the performance and exterior rounds are:

The inside of an EV is just as important as the outside, it needs to be spacious yet technology packed for all the EV enthusiasts out there. The interior design of the Porsche was kept secret for sometime, however once released it had no resemblance to that of Tesla. With their differences in mind, let’s see how these two electric vehicles pan out against each other.

Luxury exterior must be matched with an equally sleek and stylish interior. The P100D offers this and plenty more, all whilst adhering to the traditional minimalist Tesla style. Leather interior, heated steering wheel and 12 way power adjustable, heated front seats with memory and driver profile, makes this EV sounds dreamy, doesn’t it? The Taycan Turbo’s interior is clean in the sense that there is a lack of buttons and dials; however, it could be seen as slightly cluttered and overwhelming due to the 16.8-inch driver display. The driving position of the Taycan Turbo is slightly higher, this is due to the battery being beneath the central body floor.

Technology and EVs go hand in hand, just like cheese and fine wine. Tesla is known as the master of the big-screen dashboard game, and the S P100D is no exception. A 17-inch portrait infotainment touchscreen and 12-ish-inch screen replacing the gauge cluster, minimises the use of any conventional dials. The infotainment console controls the majority of the car’s functions. Want to open the panoramic glass roof or customise the automatic climate control or even simply change the radio station? This all happens with a swipe or by a touch of a button. The touchscreen, digital instrument cluster and steering wheel controls all seamlessly integrate media, navigation, cabin controls and vehicle data for ease of use.

The P100D comes equipped with the following; 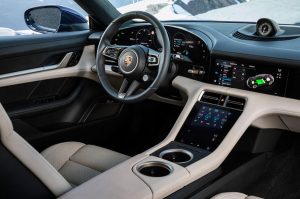 The Taycan Turbo has a different approach to display and technology as controls are split between multiple screens. The gauge cluster is a slightly overwhelming 16.8-inch screen. There’s also a centrally located 10.9-inch infotainment screen, with a second 8.4-inch screen for heating and ventilation controls. A two-zone climate system comes as standard, but a four-zone setup is available at an extra cost, giving the rear-seat passengers a 5.9-inch screen to control their half. Just when you think there can’t be any more there is also another infotainment screen just for the front passenger which is another optional extra available at an additional cost. There seems to be a screen for everything, is there more screen than EV? Control of the Porsche is intelligent and intuitive using touch operation or voice control, which responds to the command “Hey Porsche”.

Autopilot capability is where Tesla truly take the lead as Porsche lacks a self-driving system which is a highly demanded key feature for many EVs.

As Queen Beyonce says “Let me upgrade you” – upgradability is yet another sector where Tesla come into their own. Wireless over-the-air (OTA) software updates, are one of the best among the company’s biggest strengths. With the most recent being the V10.0 optimising the use of Spotify and theatre mode which includes Netflix, YouTube and Hulu. These updates are aimed to continually improve your driving experience further.

Several other automobile makers offer OTA updates, but none have done so with the same effectiveness and frequency as Tesla. Porsche claims it will also offer OTA updates on the Taycan Turbo but the big question is will the updates be as meaningful and useful? We will just have to wait and see.

So, the round up after the performance, exterior and interior rounds are:

The Taycan Turbo is the first electric vehicle to enable 350kW charging, the major drawback is that there is currently only two stations within the UK to offer this high voltage. However, there is another win for the P100D is the free, yes FREE Tesla supercharging you get with this EV.

The myth of range anxiety slowly being squashed the ability to charge-on-the-go is yet another area where Tesla excels. In fact, Tesla’s Supercharger Network is one of the largest fast-charge ecosystems on the planet, you’d expect this from the EV leaders but it is still certainly impressive. Although Porsche state that they aim to try and match Teslas dominance and power, the reigning champions have a substantial lead in charging networks and plenty of experience.

So, the round up after the performance, exterior, interior and charging rounds are:

The tally chart carried through this blog post shows who the obvious winner in this battle is…… The Tesla Model S P100D! Luckily we have this outstanding EV available for hire at EVision Electric Vehicle Hire for as little as £114.14 per day. Contact our team today for a quote.