The Sun, not the newspaper, is that very bright, hot mass of gases that lies in space. Of course, you don’t need me to tell you that. The Sun is a very obvious celestial object that we are all too well aware of. In fact, it is so noticeable and obvious that it has been the centre of worship for many thousands of years.

Sun worship can be traced back to ancient civilisations such as the Babylonians, the Assyrians, Aztecs and Egyptians for example. More recently, since the dawn of the package holiday, the Sun has mostly been worshipped by scantily clad people in places like the Costa del Sol (Coast of the Sun for those who wanted the translation from Spanish). It is an object that has obvious power and still attracts many people to it.

The power of the Sun has had many historical impacts, even before the modern technological age. Of course, these were mostly destructive in the form of bush and forest fires. Even in these Sceptered Isles the Sun had been a factor in the cause of the Great Fire of London in 1666. Starting in the dry tinder hotspot of Pudding Lane.

Of course, it hasn’t always been negative. The earliest mentions of harnessing the Sun’s power for practical use can be dated back as far as the 7th Century BC. Greeks and Romans magnified the sun to start fires for cooking, lighting torches or for heating sunrooms. Not dissimilar to what we use solar power for today.

Harnessing the energy of the Sun for powering vehicles, however, is a much more modern concept. You may though be surprised that by ‘modern’ I mean within the last 80 years and not the last 20.

Solar cells, which would go on to form the basis of the solar powered car, were first invented in 1883 by Charles Fritz. It wouldn’t be until 1955 that we would see solar power being used to move a car. Mr William G. Cobb of the General Motors company built a car called the Sunmobile. This vehicle was powered by 12 selenium photovoltaic calls and a Pooley electric motor. You would have a bit of trouble driving this car, however, as it measured a mere 15 inches in length. Even shorter than the Smart ForTwo Car.

To find the first solar powered car that could actually be driven by a person you will need to move forward just 3 years. In 1958 a vintage 1912 Baker electric car was converted by the International Rectifier Company to run on photovoltaic energy. The vehicle had around 10,640 solar cells mounted to the rooftop to help propel it. This version of the solar car was finally unveiled in 1962 to the public.

Further developments and versions of the solar powered vehicle have been designed in various parts of the world. Including Alabama, London, Tel Aviv and Tokyo. However, as with a lot of early tech (electric cars for example) they have all been viewed more as gimmicks rather than serious proposals. This would change as the true knowledge of the power of solar applications would be realised.

There are an increasing number of electric vehicles that are incorporating solar power to help give their batteries even longer range. The first electric car that I want to mention is the Sion from Sono Motors. This car is due to go into production in 2023 and will come with a battery range of 305km. It is also compatible with Type 2 and CCS rapid charging. The body of the car is coated with silicon solar panels and it is claimed that these can add an average of 112km per week (and up to 245km) just using the power of the Sun.

The next car we can see coming into production soon is the Aptera. To say that this car is a bit quirky would be like saying that the Sun is a bit hot. The Aptera’s design is all down to genius mathematicians who have worked on bringing the drag coefficiency down as far as possible. The Aptera is covered in solar panels all over the body and is as slimline as they come. The power generated can get the car from 0-60 in just 3.5 seconds. 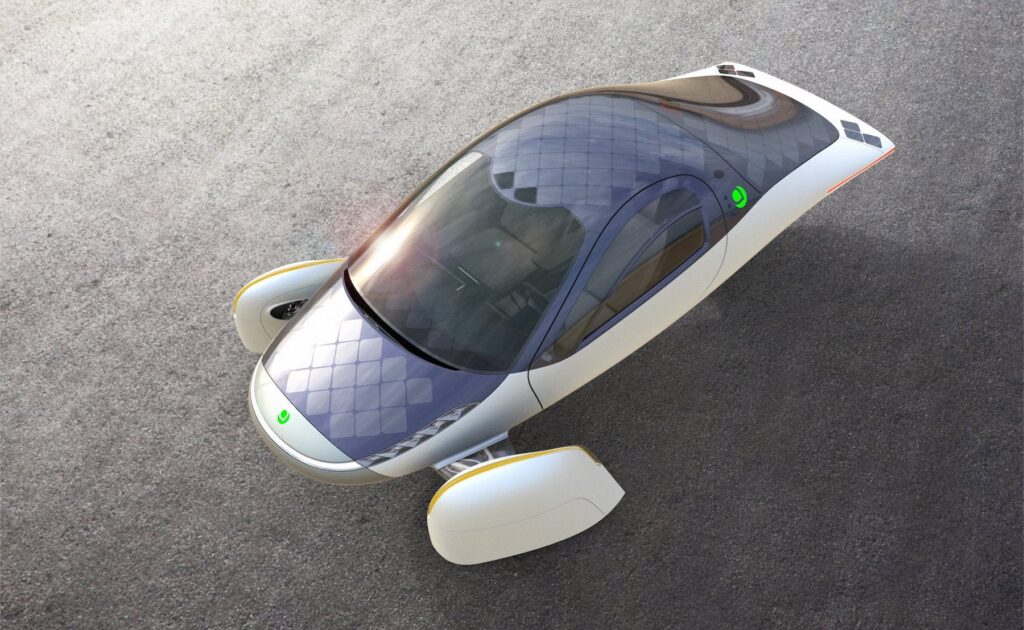 The biggest bonus with the Aptera is that it can add 40 miles of solar power to the battery per day. Much more than the average driving distance used by drivers in the UK. This means that you can possibly go a whole year without having to plug in to charge at all.

Fisker, a car manufacturer that you may have heard of before, are putting into production for 2023 a car called the Ocean. This vehicle will be using solar panels in the glass sunroof to collect power from the Sun. Although not as impressive as some of the other offerings coming out, the Fisker Ocean will still be able to add 1,500 miles per year to the battery (in perfect California weather that is).

A special mention should be given to legacy car makers, such as Hyundai and Mercedes, who have been adding solar panels to existing models in order to generate greater range in the vehicles. This is something I imagine we will be seeing more often from other manufacturers. 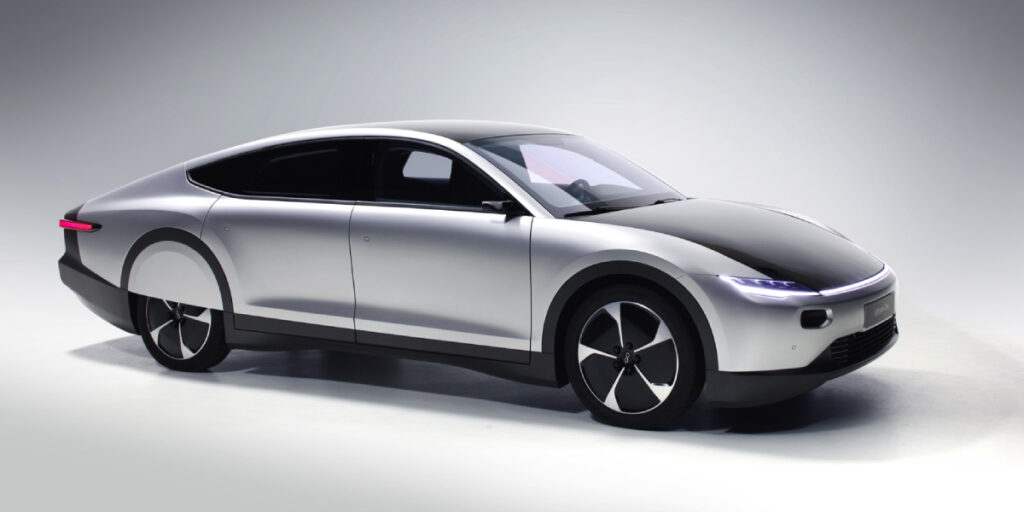 Solar Power and the Future

One issue with solar panels at present is that they are simply not powerful enough. Especially to make a significant impact on a conventionally shaped vehicle. Even the quirkier versions that we will see going into production in the near future don’t have the capability to capture enough energy for making longer trips. Physical cable charging still comes into play once again. So what is the solution? Is there even a realistic solution?

Well, the answer may lie in a mineral that most people will never have heard of. Perovskite is a calcium titanium oxide mineral which can capture and store vastly more of the Sun’s energy than current solar panels can. Perovskite can also produce a lot more energy in a much smaller size solar cell.

The first comment I would expect to hear is “so, another thing we have to mine from the Earth then?!”. Well. Interestingly, and very importantly, Perovskite is a substance whose chemical composition has been mimicked and can be recreated. This man-made Perovskite structure is just as powerful as the natural mineral that can be found in the ground. Therefore, no damaging mining to the earth is required.

The possibilities from using Perovskite structure are mind boggling. We are already about to see solar vehicles with the capability to add thousands of miles per year to battery electric vehicles. With Perovskite we could see that figure quadruple or more.

There is still some way to go in the development of next generation solar cells. However, it does seem that we are closer than ever to producing cars that will never need to be physically charged again. This is an exciting time to be involved in the green vehicle industry and I can’t wait to see what comes next.