One of the starkest ways that the coronavirus pandemic had upended daily life is its impact on transport. Simply put, we all stopped moving around. This meant that the market for electric cars could be at risk. Flights and cruises were canceled en masse. Commuters refrained from using travel provided by Transport for London (TfL), and roads became eerily empty as commuter traffic halted.

Far from just impacting public transportation today, the pandemic has altered the mode of transport of tomorrow. It was suggested that the electric vehicle market, like the rest of the auto market, would take a serious hit from COVID-19. This appears to have only been a short-term stallout.

During the early stages most methods of transport stopped to a halt. The price of petrol and diesel reached historic lows, meaning that fears were growing for the EV industry’s future.

Air Quality News reported that air pollution halved in some UK cities on the first day of the lockdown in response to the pandemic. This was carried out by analysing and monitoring data for nitrogen dioxide (NO2) in various cities such as London, Leeds, Manchester and Edinburgh. The data was compared from 24 March 2020 with the same day last year (March 26th).

Edinburgh saw the largest drop in concentrations from a daily average of 74µg/m3 in 2019. This was down to 28µg/m3 this year. It’s cause in drop was that regular commuters working from home and only essential workers were permitted to travel into the Scottish Capital.

London, Westminster also saw a massive decrease in NO2 emissions, from 58µg/m3 in 2019 down to 30µg/m3. Nevertheless, despite the fall in transport emissions, TfL relaxed penalties around air polluting vehicles. As of 23rd March 2020, all road-user charges were suspended in the Capital. This included both the Ultra Low Emission Zone (ULEZ) and London Congestion Charge (LCC). This was temporarily stopped to make it easier for key workers to travel to and from work as well as for supermarkets to receive stock. This change put the future market for electric cars at risk. Fear not though as you continue to read this article it will become apparent that the market for electric cars has begun to boom, now more than ever.

The easing of lockdown

Over time the UK lockdown saw several London Underground lines and bus routes closed. As mentioned this meant that driving to work was encouraged. However, on 18th May 2020 the penalties around air pollution for drivers were reintroduced. This was down to a government bailout deal for TfL.

In accordance with the above deal, the London Congestion Charge will also be increasing from the 22 June from £11.50 to £15. The Mayor of London is also planning to temporarily extend the hours of LCC operation to between 7am and 10pm. This will be in place seven days a week as of that date. As unfortunate as it seems this is where electric cars will benefit drivers in the Capital. Pure electric cars have zero exhaust emissions. This means that they are eligible for a 100% discount on the LCC and ULEZ Charge.

On June 16th the Government announced the introduction of green number plates. Plus a multi-million pound investment for EV research to help accelerate a zero-emission future. 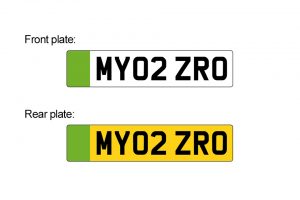 The green number plates are set to be rolled out from autumn this year. In order to drive a green economic recovery as the country rebuilds. The plates will be identifiable by a green flash on the left-hand side. They will only be available for zero emission vehicles.

Introduced as part of the government’s plans to achieve net zero emissions by 2050, encouraging drivers to make the switch to electric vehicles. The plates are aimed to make it easier for electric cars to be identified. Thus helping local authorities design and put in place new policies to incentivise people to own and drive them.

A report states that a fifth of UK drivers (18%) * say they would buy an electric vehicle to maintain cleaner air post-lockdown. Dean Hedger, EV New Business Development Manager for the AA, says: “People have enjoyed quieter streets and cleaner air in recent months, putting EV adoption firmly on the agenda.”

It seems that it isn’t only the UK that wants to maintain cleaner air post-lockdown. At least two-thirds of citizens in Britain, India, Nigeria, Poland and Bulgaria have said they support stricter laws to tackle air pollution, according to a new YouGov survey conducted on behalf of the Clean Air Fund.

It’s suggested that air pollution has made millions vulnerable to the most severe impacts of COVID-19. During this time, air quality has significantly improved as a result of actions to protect public health through national lockdowns. As a result, people said that after experiencing cleaner air during lockdown they are now in favour of stricter air pollution laws.

The UK government is set to introduce a new scrappage scheme offering drivers up to £6,000 to switch from petrol and diesel to electric cars. Introducing the scheme would encourage the uptake of vehicles that have lower carbon emissions. This also helps keep in line with the government’s existing de-carbonisation policies. The sale of new and used petrol, diesel and hybrid models is set to be banned by 2035. Aiding the government to push towards its ambitious 2050 zero carbon target. The scheme is set to also boost the UK car industry and manufacturing sector. Since sales and production levels plunged due to the coronavirus outbreak. More details will be released on the 6th of July 2020. Follow EVision on our social media channels to keep up to date with how this progresses.

With all of the above to consider and how the future of motoring is evolving, why not hire an electric car for yourself to try? We have a vast range of electric cars on our fleet. Ranging from luxury SUV’s such as the Tesla Model X to the zippy and modern BMW i3. We can guarantee that you’ll love driving electric!

Did you know that you can drive a fully electric company car at zero cost? Yes, that’s right, we said ZERO cost! This is due to the change of the Benefit in Kind (BiK). As of this April 6th, BiK for electric vehicles will drop to 0%. Meaning that there can be a significant amount of savings to be made.