After the long awaited time of ordering the Tesla Model 3 and the release date, that seemed longer than what it probably was, we are very happy to announce the arrival of yet another Tesla Model 3 to the EVision fleet. From day one, the Model 3 has been insanely popular, so much so we haven’t really seen it here at the EVision office! Customers cannot rave about the Tesla Model 3 enough, and we can definitely see why. For anyone that isn’t a Tesla convert just yet, you may be struggling to see what’s so great about these specific electric cars, but we have definitely got to sum up the top 5 best features of the new Tesla Model 3 in comparison to the other models, the S and X. 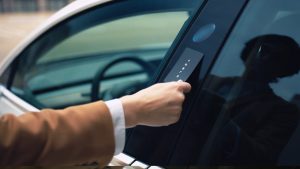 When you thought having a miniature model of the car as the key was pretty cool, you can now keep the key to your car in yourwallet and purse. The Model 3 can now be unlocked with a Tesla branded key card. However you see it, this may be an advantage or a disadvantage, depending on what sort of person you are, but we will leave you to figure that one out.

If you’re looking to hire a Tesla Model 3 then you’ll need to know how to gain access to the vehicle. To unlock the vehicle you can also use the app as you would do for the other Tesla models, but for temporary access the key card works very efficiently. To use the key card, simply tap this on the circular sensor that can be located on the black panel of the driver’s side door. The wing mirrors will fold out when it detects the card.

The next major feature that is quite different in design compared to the other Tesla models, are the door handles. Unlike the Tesla Model S & X, the handles would normally emerge from the bodywork of the vehicle, once unlocked. This may appear the same at first glance, but the Model 3 handles have been built to be pressed on the left hand side, and then the driver can open them using the right hand side. It’s almost as if Tesla are trying to replicate a feature that would often appear on a conventional car.

Tesla have also changed the design of the door handles in the interior of the car too. The concept of the door handles is to try and incorporate electric features as much as possible, considering the car is electric. Passengers can exit the car by pushing the button located above the window buttons. The door will then electrically open for you. Most passengers will assume this is the only way to open the doors, but Tesla have carefully considered the health and safety of their customers and have installed a pull handle that will also open the door as well. This is designed purely for passengers to exit the car, should the electric controls have gone in a car accident.

How to start the car up

The Tesla Model S & X were designed with a simple start stop process in order to engage the engine. When you enter the vehiclewith your key, all the driver will need to do is press the brake pedal and select what gear they require, and off they go. If you’re going to hire a Tesla Model 3 the key card will need to be placed on the surface between the cup holders and the centre storage compartment to initiate the engine. This puts an extra step in the start-up process, which also increases the security of the car.

Placing the key card on the required space may be considered a hindrance to some users, but a card holder can be purchased that will allow the card to slot in and stay secure whilst driving. If the cup holder isn’t already in use the key card could also be kept in there for safe storage.

The possibility of having your car stolen is always a worry, and it’s even more concerning when you’ve just bought a flashy new car. Luckily, Tesla have integrated a crime-stopping feature into their latest system update, which comes as standard with all Model 3s. This feature is known as Sentry Mode, and it’s designed to stop would-be car thieves from even trying to snatch your ride. The eight cameras around the vehicle that are usually used for the car’s enhanced autopilot features, are instead used for 360 degree surveillance while Sentry Mode is activated.

If the cameras detect a minor threat, such as someone leaning on or walking closely by your car, the system will enter “Alert” mode, and will start recording, as well as display a message on the infotainment screen to let them know they are being watched. If a major incident occurs, such as someone denting your car or smashing your window, the car will go into “Alarm” mode, which as well as starting recording, increases the infotainment screen’s brightness to maximum, and plays music at full volume from the car’s speakers. And if that wasn’t enough, it also sends an alert to your phone via the Tesla app, and you will be able to download a full recording of the incident from the car by plugging in a correctly formatted USB.

With this amazing feature, you’re guaranteed to have peace of mind when it comes to parking and leaving your Tesla.

Air Conditioning for your pooch?

Lastly, it may be a feature that has already been rolled out recently to other Tesla models, but as pet lovers here at EVision, we feel it is a very important and amazing feature that we love to have seen implemented in the Tesla Model 3 as well.

To access this feature, press the fan button to access the normal climate control. From here, drivers have the option to turn the air conditioning on and off, as well as turn on the air conditioning for your furry friend. When the driver leaves the vehicle, the control panel screen will change to say ‘my owner will be back soon, don’t worry the A/C is on’. We would definitely suggest turning this setting on, instead of the normal A/C as we wouldn’t want passer-bys to smash your windows to try and rescue the dog!

As EVision are an electric vehicle rental company, we do advise that pets are not allowed in our cars due to maintaining a very exceptional upkeep of our vehicles, but we couldn’t let potential future buyers forget about this brilliant feature!

As per every Tesla model there are also a couple of easter eggs hidden within the Tesla Model 3 control panel. To access the hidden extras, press the ‘T’ on the main menu, and it will display information about your Tesla. If this menu is dragged from the top down, drivers can access the hidden features.

We would like to add that they can’t be accessed whilst driving, so you will have to ensure you are parked up and the vehicle isn’t in use. Atari games are the newest addition to the Tesla Model 3, and Tesla have even gone a step further when it comes to playing the games, as drivers can now connect a USB controller up to play!

Design of the dashboard

For any drivers that have an eye for detail, you will notice that there is now only one control panel located in the centre. Tesla have got rid of the display screen that would have been behind the steering wheel, maximising the space available in the front, and creating a minimalistic feel for the driver and any passengers. As this screen has now been removed, it ensures the driver has a clearer view of the road ahead, due to the steering wheel being lower.

Looking to hire a Tesla Model 3?

So, you’ve read about the amazing features on offer, and would now like to hire a Tesla Model 3 for yourself?

Contact our team at EVision today to get a very affordable quote of £110.00 per day, decreasing to £68.98 per day depending on the length of hire. The Tesla Model 3 is shaping up to be a very popular EV for our customers, and we would hate for you to miss out.