After the successful launch of the BMW i3 electric cars, automotive maker BMW are back at it again. The previewed BMW i4 is said to launch in 2021. This will be their first ever fully electric four-door style sedan. How would you feel about the option to hire a BMW i4 from EVision?

Let’s have a look at what we know so far about this EV.

Back in 2014, BMW took a very confident step into the world of electric cars, officially launching its “Project i” sub-brand with the i3. The i4 is part of a bold movement within BMW to transition to an all electric line up, they refer to as “NEXTGen.” As such the i4 is the first fully electric coupe car of the bunch, with its predecessor being the i3. BMW has already indicated its plans to put the i4 on sale in 2021, one of 25 new electrified models the brand has committed to bringing to market by 2025.

Whilst most details are still vague on the i4, we know this for sure, it’ll have to be speedy and sporty. Especially if it will have a chance against rival electric cars such as the Tesla Model S or Model 3.

The BMW i3 94Ah, 120Ah and Range Extender models prove very popular here at EVision, will we see this electric car available for hire?

The appearance of the BMW i4 is set to sit between the style of the pure electric i3 and their Hybrid i8. For those who aren’t familiar with either of these vehicles, it will look very similar to the sedan style of the Tesla’s Model S. Like, quite a lot.

The shell of the EV is rumored to differ from previous electric cars. It is unknown at this stage as to whether this EV will feature BMW’s CLAR platform. But we do know that it rather than it being a carbon-fiber structure similar to its predecessors the i3 and i8 electric models, we can expect to see more lightweight aluminium included. You maybe wondering what a CLAR platform is? CLAR is created by BMW for rear-wheel drive models. In comparison FAAR was created for front-wheel drive models.

The grille of this EV is covered up at this stage. It remains to be seen if the kidney grilles will be as large as previous concepts or conjoined. Leaked spy shots captured from track testing, show that the vehicle will have a sporty arching roof-line, which is more dramatic than the i3. This will create a sleek rear without compromising the passengers headroom. It is supposed to be a family car afterall.

The four-door i4 body appears to have a larger rear that we would assume opens to reveal a large cargo area. Similar to that of the BMW 4-series Gran Coupe.

Based on the latest spy photos from the test track, the electric cars interior looks like it will closely match the Internal Combustion Engine (ICE) Gen 4 Series Gran Coupe. 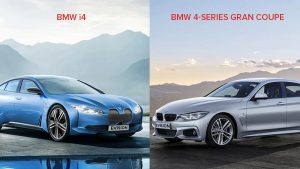 It’s comfortable and stylish but by no means the sci-fi design of the i Vision Dynamics concept. If you haven’t bought into the super minimalist design of the Tesla models, you’re probably going to be in luck with the i4.

We expect the latest and greatest in-cabin tech from this EV. Such as a large touchscreen infotainment system, a digital gauge display, and maybe even semi-autonomous driving modes. We’ll know more when the i4 gets closer to its official reveal date.

BMW are still very hush-hush on the i4’s specifics. So far we know that the electric cars are expected to have a range of up to 435 miles. Which beats the Tesla Model 3 Long Range by a whopping 140 miles! However, the range has fluctuated, with some predicting around 300 miles to be more accurate.

The battery of the i4 is rumoured to be either a 90 or 120 kWh lithium-ion battery. This will offer an acceleration rate from 0-60 mph in 4.0 seconds. For context, this will beat the Audi e-tron, Kia e-Niro and it’s predecessor the BMW i3.

BMW has also stated that the i4 will have a top speed of around 124 mph. The i4’s top speed has a little way to go to reach the Tesla Model S P100D, which reaches a limited speed of 155 mph.

That said, at this point, these are all predictions. This electric cars finer details are yet to be decided and announced.

Overall, the BMW i4 seems to look like it will be a great addition to the EVison fleet. Would you be interested in being able to hire a BMW i4 from EVision?