It’s rare that a tiny five-door hatchback generates massive amounts of excitement, but when Honda released photos of the Honda E, people couldn’t contain themselves. While this may be Honda’s first pure electric vehicle, they have since announced plans for six mainstream electric vehicles (EVs) by the end of 2022.

For now, let’s look at the Honda E, and why it’s got everyone’s heads turned!

From a first glance, the Honda E looks spectacular with its cute and retro design. It’s certainly dropped some jaws at motoring shows since it’s release, and onlookers admire its unique shape. With circular headlights and gloss black exterior cladding, it’s easy to see why this EV is a sure winner. 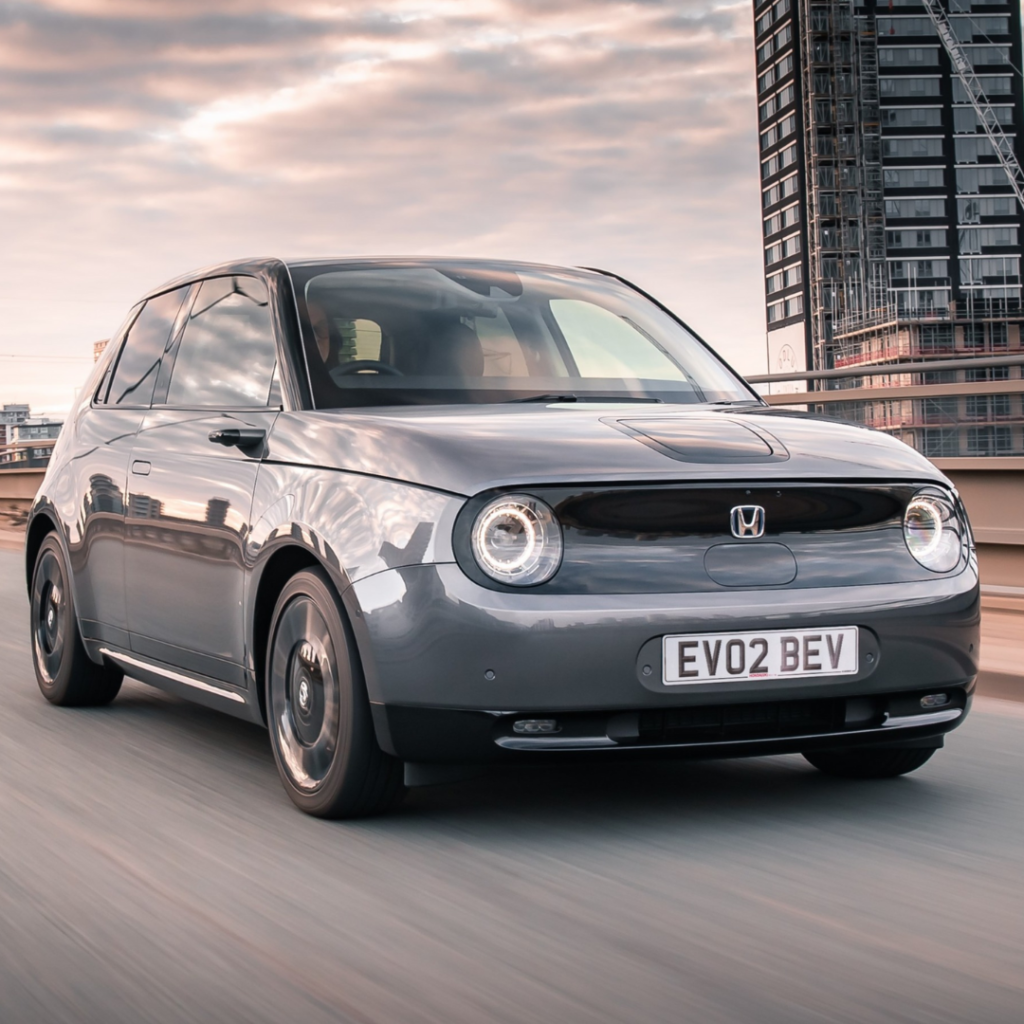 Surely the Honda E is a style-conscious, tech-lovers dream EV? Well, unfortunately electric vehicles need to do a lot more than just looking cool! Many question how many miles they can travel between charges and there are now plenty of all-electric rivals to the Honda E.

The Renault ZOE and BMW i3 both have really good stats. They pack a decent amount of range into such small EVs that they’re strong competition to vehicles like the Honda E. With that in mind, how does the Honda E compare to its rivals?

How does the Honda E perform?

The Honda E’s looks are backed up by its genuinely fun driving manners. It can really dart around town, with plenty of grip for zipping around ridiculously tight turns. Although this EV was built for the city life, it remains quiet on faster roads. There isn’t a lot of wind noise, and the electric motor is almost silent.

If you opt for an entry-level model, you’ll enjoy 134bhp, whereas the pricier Advance model packs 152bhp. The Advance can hit 62mph from a standstill in 8.3 seconds, which is 0.7 seconds faster than the entry level pack. Whichever you choose, the Honda E pulls away pretty quickly (and let’s be honest you wouldn’t be expecting Tesla stats!)

With a push of a button, you can enable one-pedal driving which turns the car’s regenerative braking system up to its maximum level. In turn, slowing the car quickly without needing to push on the brake pedal at all.

Here comes the not so great stats… With a fully charged battery the entry-level Honda E can only muster 137 miles. While the advanced model can reach 125 miles. This means in terms of real world range, you’ll be looking at getting roughly 100 miles out of each. While the range of an electric vehicle isn’t everything, this is significantly less than lots of other EV models on the market. The Renault ZOE can do up to 245 miles, while the newest BMW i3s can reach up to 200 miles.

Inside the Honda E, you’ll notice there’s a lot of screens. A lot. There’s a 8.8-inch screen containing the instrument cluster directly behind the steering wheel, which displays your speed and remaining range. This is joined by two 12.3-inch infotainment touchscreen that make up the width of the dashboard.

These are connected on both sides by 6-inch screens that display a live feed from the camera door ‘mirrors’. We imagine these will take a bit of getting used to, but you can adjust these cameras to suit your driving positions. What’s more is the screens are overlaid with useful guidelines to help you judge how far away you are from other cars when you indicate.

Just in case that wasn’t enough, the rear-view ‘mirror’ (which is also a camera), can display a live camera feed from directly behind the car in the Advance model. Overall, the screens do help the futuristic and sleek feel of the vehicle, but we can see why it would be too much for some drivers. 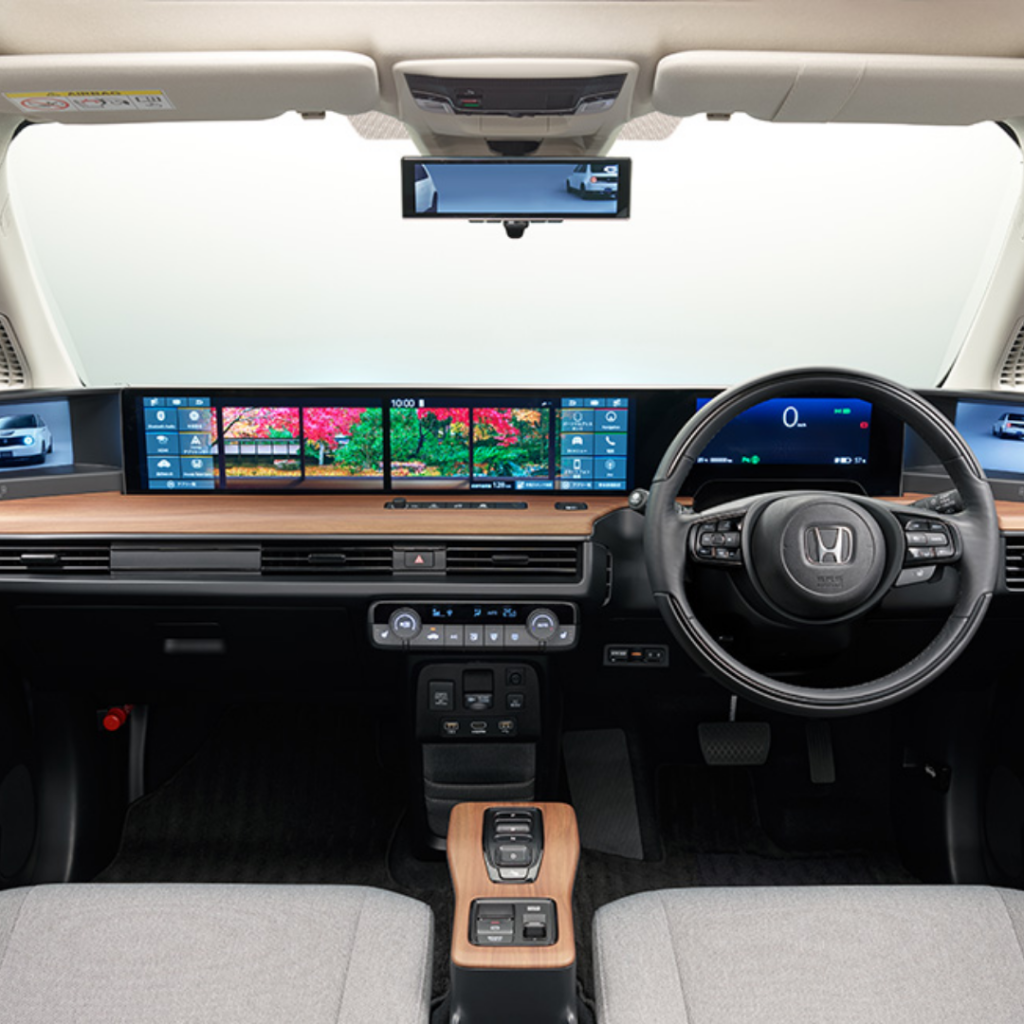 Both E models come with an impressive amount of safety equipment, including automatic emergency braking – a feature that isn’t currently offered on some of the rival EVs, such as the Seat Mii all-electric. However, as of yet, the Honda E hasn’t been crash tested by safety experts Euro NCAP.

Thank goodness the air-conditioning controls are pleasantly simple. The E’s physical buttons make it much easier to adjust the temperature while driving. The Honda E also comes with a couple of quirky features to keep you occupied while the battery charges! You can turn around the two infotainment screens which will turn them into a giant virtual aquarium. Alternatively, you could use the HDMI port to connect a laptop or games console.

So how big is this teeny EV?

Despite its small dimensions, space in the front is actually very good – even taller adults are likely to feel comfortable! The front storage is also pretty decent! There’s a useful large cubby between the seats and a cup holder that pulls out from behind the gear selector buttons.

Space in the back is similar to the Renault ZOE, which means there’s more leg and head room than in the Mini Electric or Seat Mii. There are only two seatbelts in the back so carrying five people is automatically out of the question. But this does give your two rear passengers much more room to get comfy.

The boot on the other hand is not spacious. It’s actually smaller than the tiny boot on the equally tiny Mii Electric. A saving grace is that the rear seats do fold down, giving you more room for luggage.

The Honda E is a great addition to the UK’s electric vehicles market! It’s the perfect all-electric option for those looking to buy an electric car because they love the way it looks. Also, on top of that, you’ll get a brilliant, fun drive as well as a well-equipped and upmarket interior! Sadly, the limited range will probably put a lot of potential EV buyers off.

What’s your opinion on the Honda E? WE cannot wait to see what other electric vehicles Honda have in the pipeline!