If you’re keeping up with the news regarding the pledge to cut emissions and switch to electric vehicles, then you should have heard about the recent Vauxhall announcement. Electric vans are becoming a mainstream option for businesses and individuals. When demand hits an all time high, manufacturers need to keep up…

The plan to electrify Britain has officially started. Vauxhall owner Stellantis, has finalised plans to build electric vans at its Ellesmere Port in Cheshire.

This particular location has scrapped the build of a new Vauxhall Astra model, leaving jobs in jeopardy. It’s fantastic news to hear that the £100m investment is securing over 1000 jobs, as well as rolling out the production of electric vans.

Ellesmere Port will also contribute to the production of electric car models from the likes of Vauxhall, Opel, Peugeot and Citroen.

It’s time for a change

Head of Stellantis, Carlos Tavers, has claimed it’s time for a change. The company will no longer be investing in conventionally fuelled petrol and diesel vehicles. With the backing of the UK government, the funding has allowed production to commence in the electric vehicle sector.

Last week, the latest EV news came through Japanese manufacturer, Nissan. After they announced that the production of electric vehicles was expanding in Sunderland, creating up to 1,650 new jobs, other car makers felt the need to keep up with changes and competition.

Stellantis is the fifth-largest car manufacturer. They also own brands such as Peugeot, Fiat and even Chrysler. It’s amazing that big brands are setting the trend and adapting to changes in the transport industry.

So why is now the right time to invest in electric vans and other vehicles?

The interest in electric vehicles, electric vans in particular has grown considerably in the last 12 months. The sales of EVs have also dramatically increased during the pandemic. Drivers are now seeing the full potential of driving an electric vehicle, and how they could be reducing the emissions on our planet.

The main Vauxhall production centre based in Luton is currently operating at full capacity and the demand for vehicles is already huge. The choice to expand production at Ellesmere Port to support the growth of electric vans in the UK is a no brainer!

As the ban of new petrol and diesel vehicle sales looms, it makes complete sense to get started and prepare for an all-electric future now. Why wait till 2030 when we can reach targets a lot sooner?

The big brand name we all know and love, Vauxhall, was first founded in 1857 by Alexander Wilson. Originally it started as a pump and marine engine manufacturer until it was sold in 1863.

It wasn’t until 1903 when Vauxhall began making cars, and was truly considered a British brand. Vauxhall is now considered one of the largest manufacturers of vehicles and one of the longest-serving brands in the country.

Vauxhall proudly holds the award for the world’s first sports car, and Britain’s first 100mph car. Now they are heading towards another huge milestone in manufacturing. Not only have they explored the route of electric cars with the Vauxhall Corsa-e and the Mokka-e, electric vans are now on the horizon. Let’s take a look into the types of electric vans available from Vauxhall as well as competing manufacturers.

CURRENT ELECTRIC VANS ON THE MARKET

The Vauxhall Vivaro-e is one of the most popular electric vans currently on the market. It has been named ‘Winner of the International Van of the Year 2021‘ and we can certainly see why.

Delivering an average range of 200 miles, and the choice of either a 50kWh or 75kWh battery, drivers can’t go wrong. If you’re looking to electrify your work fleet, we guarantee that the Vivaro will not disappoint! 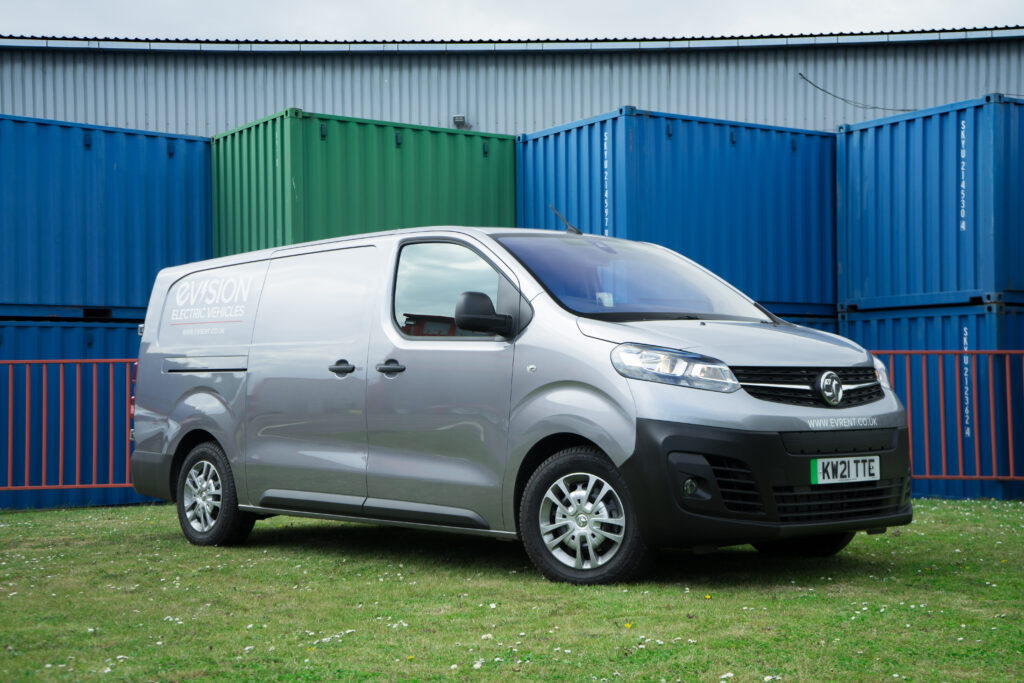 Based on its diesel counterpart the Vivaro-e is incredibly similar in terms of shape, exterior and interior features, however the only major difference is that it emits zero emissions. The Vivaro-e offers a payload between 1,002kg and 1,226kg, depending on the size of the battery. The option of a panel van and double cab is also available. There’s plenty of space for transporting cargo, people or even both!

The Renault Kangoo is another fantastic option available when it comes to electric vans. It’s had some pretty big upgrades since it’s previous models, making it more usable for everyday life.

Renault have taken some time to improve the range on the Kangoo and this one has a hefty 120 miles! That means this electric van is able to travel 70 miles further than its predecessor before needing a top up.

It also had a battery upgrade! Now these electric vans are fitted with a 33kWh battery which is a variation of the one used in the ZOE. The standard van has a load volume of 3.3 cubic metres and a load length of 640kg. 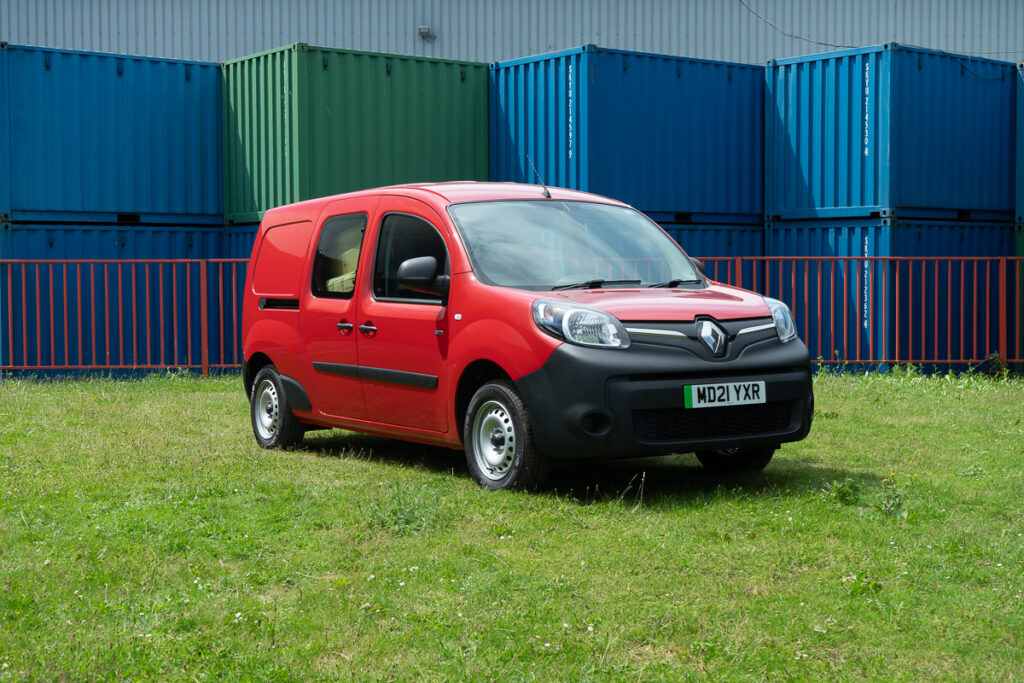 Vauxhall’s Combo-e is a multi award-winning Combo Panel Van that’s ideal for your business on the road for less. 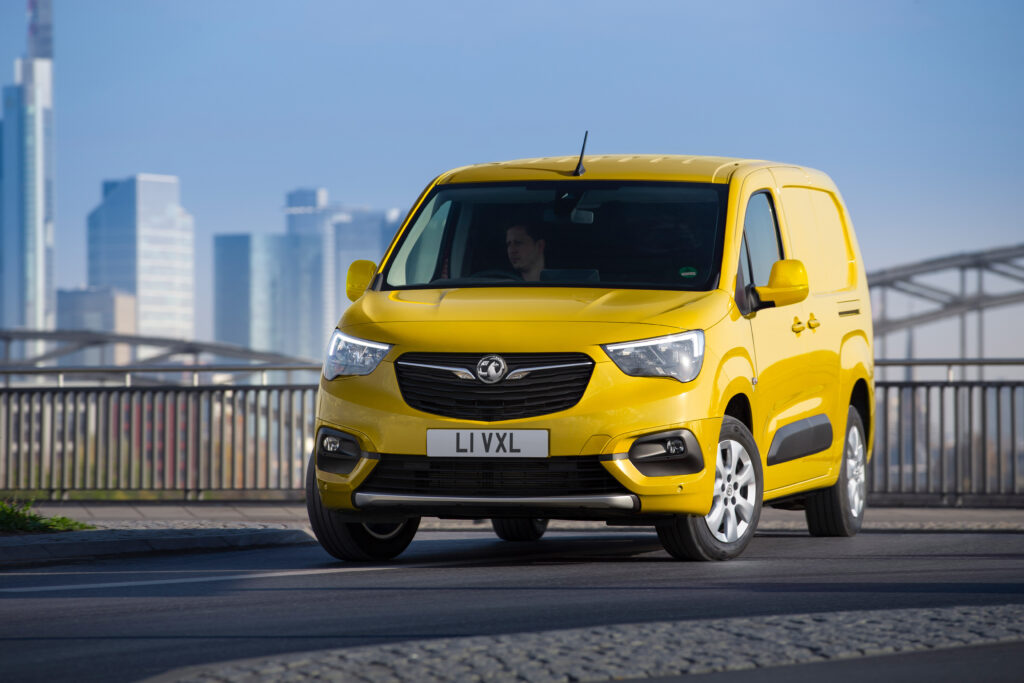 Fitted with a 50kWh battery, the Combo-e offers drivers an average of 174 miles of range. A 1,000kg payload means these electric vans are perfect for any commercial fleet looking to make the switch to electric!

All models are equipped with smartphone compatibility as standard. You can also add optional extras including a larger, 8-inch touchscreen and an array of driving aids.

The e-Expert is nearly an exact carbon copy of the diesel alternative. There are three sister models to the e-Expert – the Vauxhall Vivaro-e and Citroen e-Dispatch. They all offer a competitive payload and driving range.

You have the choice between a 50kWh or 75kWh battery which gives the van a range of 143 or 205 respectively. However, the usable range can be managed using driving modes Normal, Power and Eco.

With a payload of up to 1,226kg and load volume of 6.6. cubic metres, the e-Expert is the perfect addition to any commercial fleet! Like its diesel counterpart, these electric vans offer three trim levels meaning you have some choice over what you need in an EV.

It’s also one of the only cars on the market that is capable of rapid charging. This means you can reach 80% charge in just 30 minutes with the smaller 50kWh battery, or 45 minutes for the 75kWh battery. 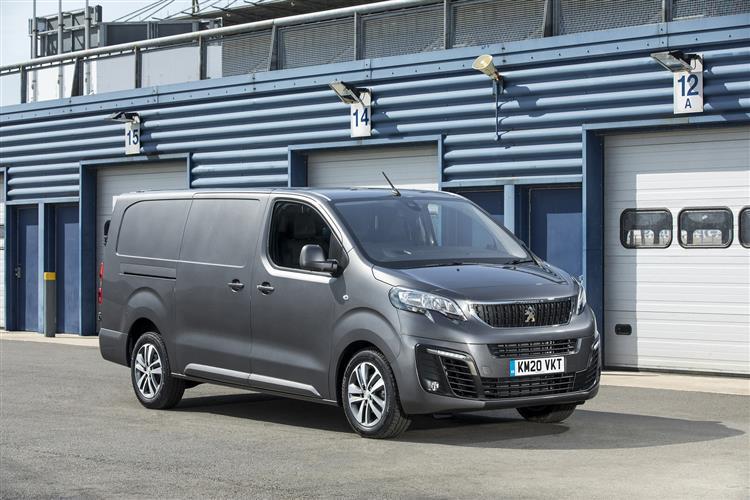 HIRE AN ELECTRIC VAN FROM EVISION

Do you want to experience driving a fully electric van? Encounter the ultimate electric vehicle on the road, and rent an electric van today from EVision today.

Not only will you be receiving a fantastic van leasing deal, our customers will also benefit from:

Are you ready to upgrade your fleet to electric vans? Get in contact with us to discuss a particular EV in detail. Hires can be booked directly on our website or by giving our experienced team a call on 01634 914063.