I was born in the 1970’s and grew up in the 1980’s and 1990’s. A lot of my youth was spent in front of my Commodore Amiga playing some of the greatest 16 bit computer games ever made. One of those that really stood out for me was a game called Lotus Esprit Turbo Challenge. As well as its successor, Lotus Turbo Challenge 2. I took great joy racing my Lotus Esprit or my Lotus Elan around tracks and streets, revelling in the power of the red wonder in front of me.

And, if you were anything like me, you would have used the automatic setting rather than manual controls (why make it harder for yourself). It seems that the Lotus was destined to be an electric car for every gamer child out there from days gone by. It has taken them a while, but Lotus have come up with the goods and have entered the electric car world. Their efforts are, well, super impressive. My inner child smiled with joy when I saw what they produced.

The Lotus Group of companies was founded in 1959 and has a very strong racing car history. With this in mind, the company has always looked to make their cars lightweight, fast and aerodynamic as possible, with great handling to boot.

With this in mind it is perhaps surprising that one of their first electric cars would be an SUV. Does this mean that Lotus are not taking the changeover to electric vehicles seriously? Au contraire. A walkthrough of the new Lotus Eletre will assure you that Lotus are as serious as you can get.

Looking at the Lotus Eletre from the outside you can’t help but notice that this is a very big SUV (or SPUV as Lotus refer to it). The vehicle is 5 metres in length and it weighs about 2 tonnes. Very little assures you that this will be lightweight and sporty at all. However, when you get a closer look you can see some aspects of the car are, well, a little different.

The Eletre is as porous as they come. There are cleverly crafted vent holes on the front and back that allow the air to flow through freely. Plus it will help keep the coefficiency rating of the car down (the rating is a stunningly low 1.3). The vents on the grille are a mosaic of small triangles. That open when the battery needs extra cooling and closes when the battery has cooled sufficiently. This is another trick to keeping that coefficiency number down as low as possible.

The Lotus Eletre is built from the ground up using Lotus’s bespoke electric car architecture. It also has a body made out of carbon fibre and aluminium. Lotus have done everything they can to keep the weight down as low as possible. If there is anything on or in the car that isn’t needed, then it isn’t there.

Although it is not yet legal in the United Kingdom, the Lotus Eletre is ready for fully autonomous driving. As well as having a number of cameras on the vehicle, there are also retractable Lidar sensors that will only come out when the autonomous mode is selected. When not in use they will retract back into the car in order to keep up the aerodynamics of the vehicle.

Another really fun feature that I love is the clever lighting on the Eletre. The lights at the front of the car will change colour when you are charging or when you change your driving mode. Very cool. The lighting bar that goes across the boot will change to green when the car is charging and the length of the lighting shown will tell you how much the car is charged. Even cooler!

The Lotus Eletre is also very much future ready. As well as the Lidar sensors making the car autonomous driving ready. There is also the charging speed capability of the car that is ready for the next generation. The fastest charging speed we can see in public today is currently 350kW. The Eletre will be capable of charging at 800kW when the charging networks are able to match those speeds. Now that will be very rapid charging! 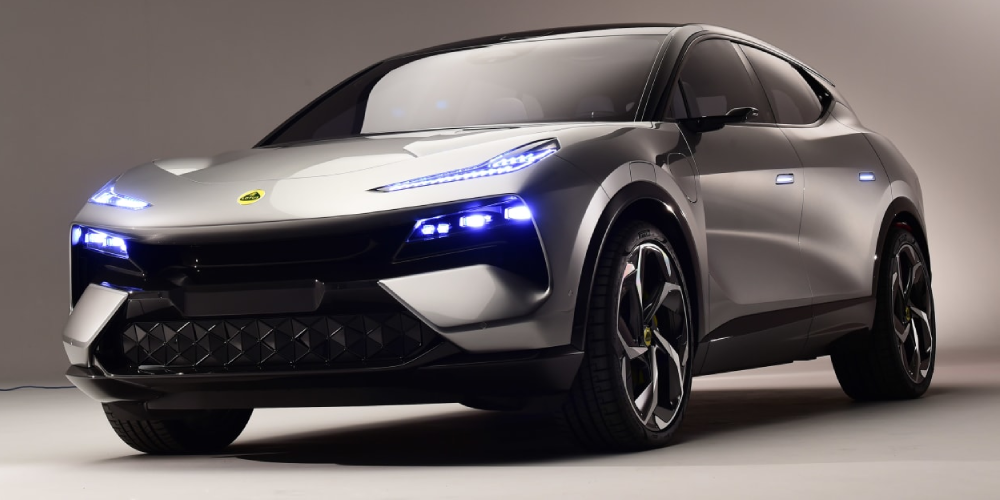 Lotus Evija – How Many Horses?!

The Lotus Eletre wasn’t the first Lotus car to be unveiled. That accolade goes to the Lotus Evija. And when the Lotus Evija was unveiled back in 2019 it was clear that Lotus weren’t messing around. Not only had they not started with a standard production car, Lotus also bypassed the supercar and went straight in for producing a hypercar instead.

Just one look at the Lotus Evija and you know you are in the presence of something special. The car is very low set and looks like it was built for speed. And your eyes would not be deceiving you. With 2,000 bhp (yes, that’s not a typo) the Lotus Evija is capable of reaching 180mph in under 9 seconds. This is an instant facelift G-Force area.

The body of the Evija is made primarily from carbon fibre to keep the weight of the vehicle down. As with the Eletre, the Lotus Evija is extremely porous to allow the air to flow freely through the car. There are large slits in the front and back of the car, that go all the way past the tyres. Which will help the aerodynamics of the vehicle and to help it stick to the road when you reach those scary high speeds.

Speaking of the air holes at the rear of the car, the output at the back is shaped like the outline of a burner. The break lights go around these holes in order to create a burner effect as well. This is a really nice touch and is very cool to see.

Of course, with a car like this you would expect the price tag to be equally impressive, and you would be correct. Lotus are only making 130 of the Evija and you will need to fork out a whopping £2.4m. Upon reservation there is the small matter of a £250,000 deposit to mention as well. As nice as the car is, I think my bank manager will prefer me to stick with my Kia EV6 for now.

Lotus have shown that they are very serious when it comes to electric cars. They have in fact stated that their bespoke electric car architecture that is seen on the Lotus Eletre will be the basis of the Lotus electric cars to come. We are expecting there to be many more sports cars coming from Lotus. With a slightly more affordable price tag than the Lotus Evija. We also expect Lotus to produce some more vehicles appealing to the mass market like the Eletre will.

These are exciting times for the British manufacturer. Although owned by Chinese company, Geely, the Lotus vehicles are sticking with British tradition. All their cars are being produced in Norfolk and will be British to the core.

Lotus have shown that there are no limits to where we can go with electric cars. Aston Martin is bringing out an electric offering soon and we hope that the impressive statement made by Lotus is the start of the luxury supercar giants following suit. Porsche and Lotus have led the way. Who else will follow?