Bayerische Motoren Werke AG, more commonly known to you and me as BMW, will launch their battery-electric vehicle (BEV) SUV in 2020. The BMW iX3 will be the third model of the BMW ‘i’ brand, which was established in 2011. Who’s excited for a new model of the BMW i series of electric cars?

The automaker said that the BMW iX3 is going to be equipped with a 74 kWh battery pack, which offers 273 miles of range. 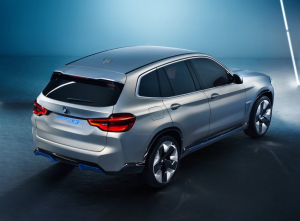 Compared to other powerhouse electric cars such as the Tesla Model S P100D, the mile range offered is quite impressive. As usual, it’s important to note that this figure is the WLTP (World harmonized Light-duty vehicles Test Procedure) range. This is often difficult to achieve in real-world conditions for most people. However, BMW claims that the 5th gen electric powertrain is really efficient: ‘The vehicle’s fifth-generation BMW eDrive technology comprises a drive unit in which electric motor, system electronics, and transmission are brought together into a central housing. As a result, the required installation space of the drive technology and its weight are considerably reduced. The ratio between motor output and weight of the drive system improves around 30% compared to the previous generation.’

This efficient technology of the fifth-generation electric powertrain will also be deployed in the all-electric BMW i4 and the BMW iNEXT. The electric cars motor will deliver up to 210 kW/286 bhp and a torque of 400 Nm. It is also stated that the launch model will be a rear-wheel drive.

BMW also says that the vehicle will be capable of a charging rate of up to 150 kW. Meaning that you will be able to charge to 80% within 30 minutes using a DC fast charger.

Where will it be produced?

The BMW iX3 is based on the conventional internal combustion engine (ICE) BMW X3 SUV. The iX3 was unveiled at the Auto China show in 2018. This electric car will become the first model from the automaker that is available in both, a conventional ICE and as an plug-in electric. The exterior of the ICE X3 and the iX3 look very similar. However, you can expect changes in the cabin. As with most new electric cars it will come packed with more technology. Which is great news for all tech whizzes out there. 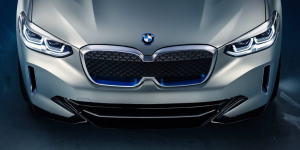 As for the design, BMW kept the style more classic.They have not been as adventurous as they were for their first EV, the BMW i3. Instead they have kept the recognisable design of the X3 with some “electric design accents’. This is to keep the iX3 on brand with the BMW i series.

How does it compare to other 2020 electric cars?

Here at EVision we think the BMW iX3 is going to compete with the likes of the newly revealed Tesla Model Y. They appear to have a similar size battery pack and style. However, we don’t have the exact dimensions of each vehicle yet. It will also compete closely with other all-electric SUVs like the Tesla Model X, the award winning Jaguar I-PACE, the pure electric Audi e-tron and the Mercedes EQC.

One thought on “A look at the BMW iX3”