The fast evolving global market of electric cars is full of surprises. The announcement from Sony Corporation regarding an electric vehicle concept certainly came as a huge shock. However, we are all left to wonder if Sony will succeed or suffer the same fate as Dyson?

Can they compare to Tesla electric cars?

It’s a well known fact that in the past decade, automotive start-ups like Tesla have redefined the market for electric cars. Other companies however have decided that they want a slice of the future of motoring pie. In fact, for years there have been rumours of Apple launching an electric car. Therefore there is no need to be surprised if a well established multinational company like Sony wants to join the electric vehicle race or contribute to it.

The most interesting thing about Sony developing an electric car prototype, is not the car itself. Instead it is the possibility of how the automotive sector will be disrupted in the coming years. This is due to how consumers will engage with the concept of mobility changing. In particular, this will include the rapidly evolving technology of autonomous driving. In the future we will not drive but simply be driven. Instead the cabin will be a space for entertainment, work etc. and not a space for driving. Sounds scary, right? 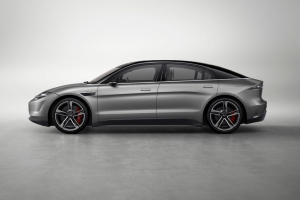 The sedan style electric car is called the Sony Vision-S. Sounds very similar don’t you think, not to mention that the appearance is familiar too?

It is a well known fact that many automotive companies use an ‘S’ to denote the style of the car, either a sedan or SUV. For example the Rivian R1S – SUV and the Tesla Model S – sedan. Currently Sony has not made any comment regarding selling the electric cars to the public (from prototype to production).

Sony has collaborated with a number of large companies to create their prototype. These companies include; Continental, Qualcomm, Benteler, Blackberry, Gentex, Nvidia, Magna and Bosch.

The concept of the Vision S is developed on a new EV platform. This will also be suitable for different types of electric cars including coupes, sedans, SUVs and MPVs.

The Vision S is a four-seater EV that has two 200 kW motors (front and rear). The electric cars are capable of a 0-62 mph rate of 4.8 seconds. For reference that’s comparable to Jaguar I-Pace’s 4.5 seconds and the Tesla Model X’s 4.8 seconds.

The top speed is set to be 149 mph, which comes in slightly faster than the Tesla Model 3.

The interior of the Vision S

The cabin envisions and encapsulates the future of autonomous driving. 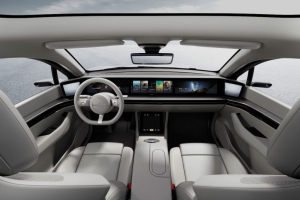 The electric cars interior style shows you the future where “people will eventually be relieved from car operations.” Sony’s aim was to create a driving experience, whereby it’s a new kind of mobility.

The interior will have 360 reality audio to create an immersive audio experience.  The cabin entertainment is extended further with enjoying videos and movies. This is no shock as Sony are known for their audio and visual technology.

The Vision S electric cars will be incorporated with Sony’s ‘safety cocoon’. It will be cram packed with safety technology such as driver monitoring, parking assistance, advanced camera monitoring system and oval sensing. Not to mention that the Vision S has 33 sensors. Sony has invested its core expertise to develop the car, to include, imaging and sensing technologies.

Well, with all of this in mind only time will tell how it will go. Will the exciting prototype of the Vision S be nothing but a stunt to showcase Sony’s electronic capability for the broader electric vehicle market. Or it is Sony’s real entry into the world of electric cars. However it is key to note that Dyson also attempted the same journey to migration from consumer electronics to electric cars. Either way, it is a great way to start 2020, with hopefully more companies realising that the future of motoring is electric.