German manufacturer’s, Volkswagen, are steaming ahead with their range of pure electric cars. Their plans involve having up to 75 all-electric models by 2029 and they hope to sell roughly 26 millions electric vehicles (EVs) in this period.

All of Volkswagen’s up and coming electric cars are being developed on the basis of the new Modular electric drive matrix (MEB). The MEB platform enables manufacturers to flexibly create vehicle and interior design ranging from compact cars to SUVs and buses. One of the biggest advantages to the MEB system is that VW can design electric cars with longer ranges, faster charging times and quicker acceleration.

Let’s take a look at the current EVs available from Volkswagen, and ones that are hitting the UK market before 2025!

Volkswagen’s first all-electric vehicle was the ID.3 which established a new era of mobility with their ID. family. The vehicle itself was designed innovatively with intelligence and sustainability in mind.

The ID.3 is the smallest model in the ID. family, but with a range of 250 miles it certainly gives the others a run for their money. It’s an ideal electric car for anyone who’s new to electric motoring as it’s not too far from a conventional, automatic car.

Inside the ID.3, you’ll find a sparkling, clean and minimalist cabin. There’s also plenty of room for 4 passengers and a load of shopping. All of the Volkswagen ID. cars come fitted with great levels of technology, including voice control. 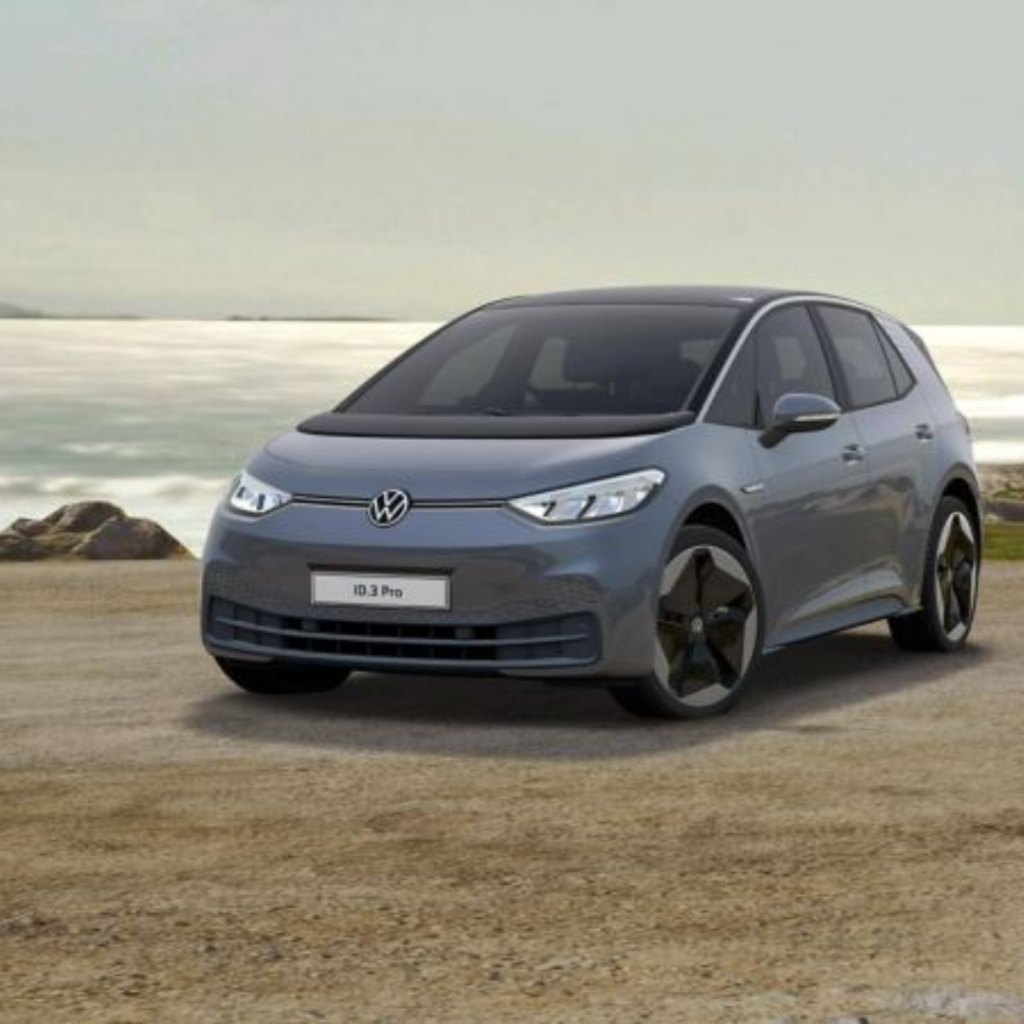 Volkswagen’s ID.4 is an urban SUV which shows how attractive electric driving can be. As with the ID.3, this electric car comes equipped with top level technology.

It’s a great option for those testing out an electric family car or a weekend getaway with the kids. Inside, it feels spacious so no passengers feel cramped together. There’s a great amount of boot space too – easily enough to fit a family load of luggage.

There’s also a colour changing feature which allows drivers to choose from 10 different colours to illuminate the interior. This includes the dash panel, the mobile phone holder and the doors. We’re sure the kids will love playing around with this.

When looking for a family SUV, safety features are right at the top of the list of desires. Luckily, the ID.4 is fitted with lane-keeping, steering assist and blind-spot monitoring. You can hire the Volkswagen ID.4 and choose between bright white or honey yellow, here.

The ID.4 is actually produced with a carbon-neutral balance and it it’s charged using sustainably produced electricity, like the ones at EVision Electric Vehicles, it will remain carbon-neutral on the road and for its lifetime. 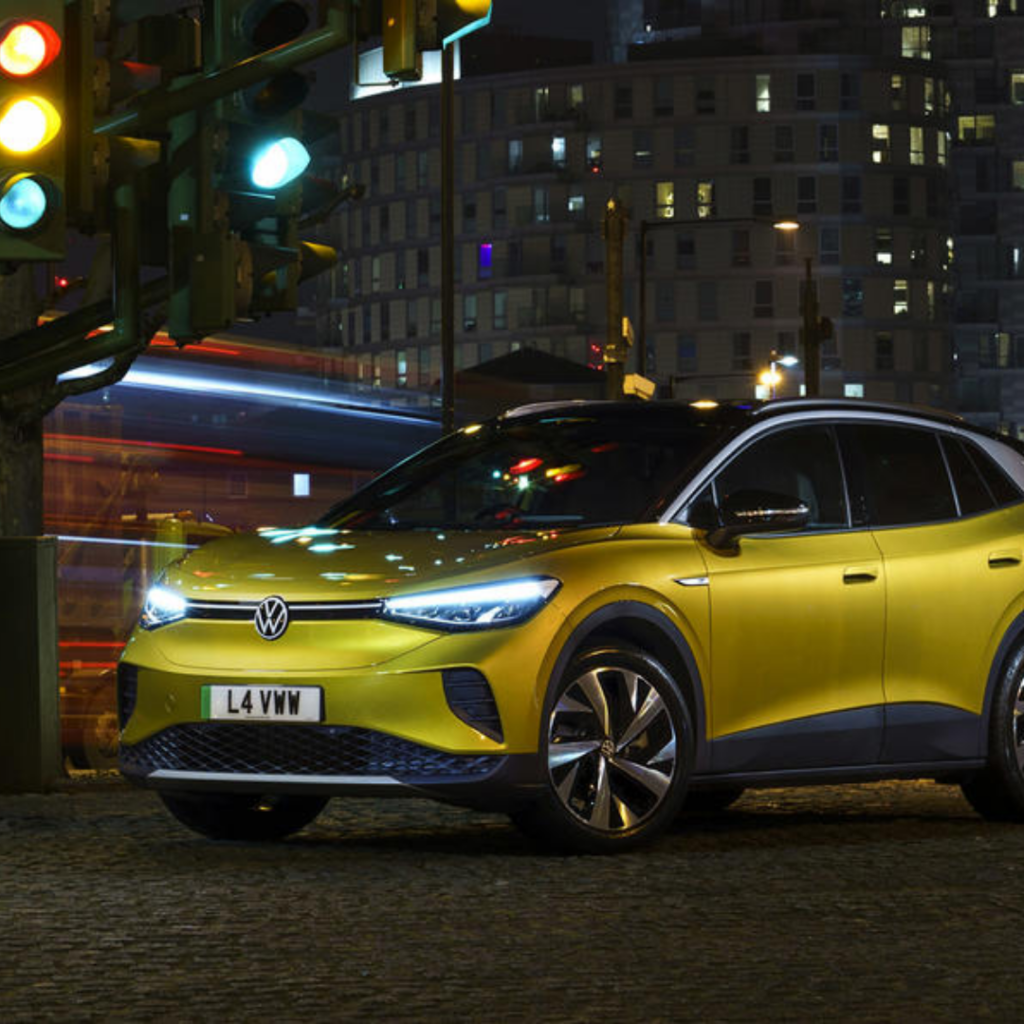 The ID.5 will be the third addition in Volkswagen’s ID. family to be released in a year. It will be a stylish SUV coupe which will combine a sporty, elegant coupe design with the qualities of the ID. family. This will really redefine the limits of electric motoring.

It will be fitted with a 77kWh battery, which is slightly larger than its other family members. Volkswagen boasts the vehicle will be “as powerful as an SUV, as efficient as an ID. and accelerated like a sports car.”

As well as its larger battery, the ID.5 also has a surprisingly great range for an electric vehicle. The GTX model can travel 308 miles, whereas the ID.5 standard model can travel up to 335 miles. We’re expecting to see the ID.5 and ID.5 GXT models launch in 2022. 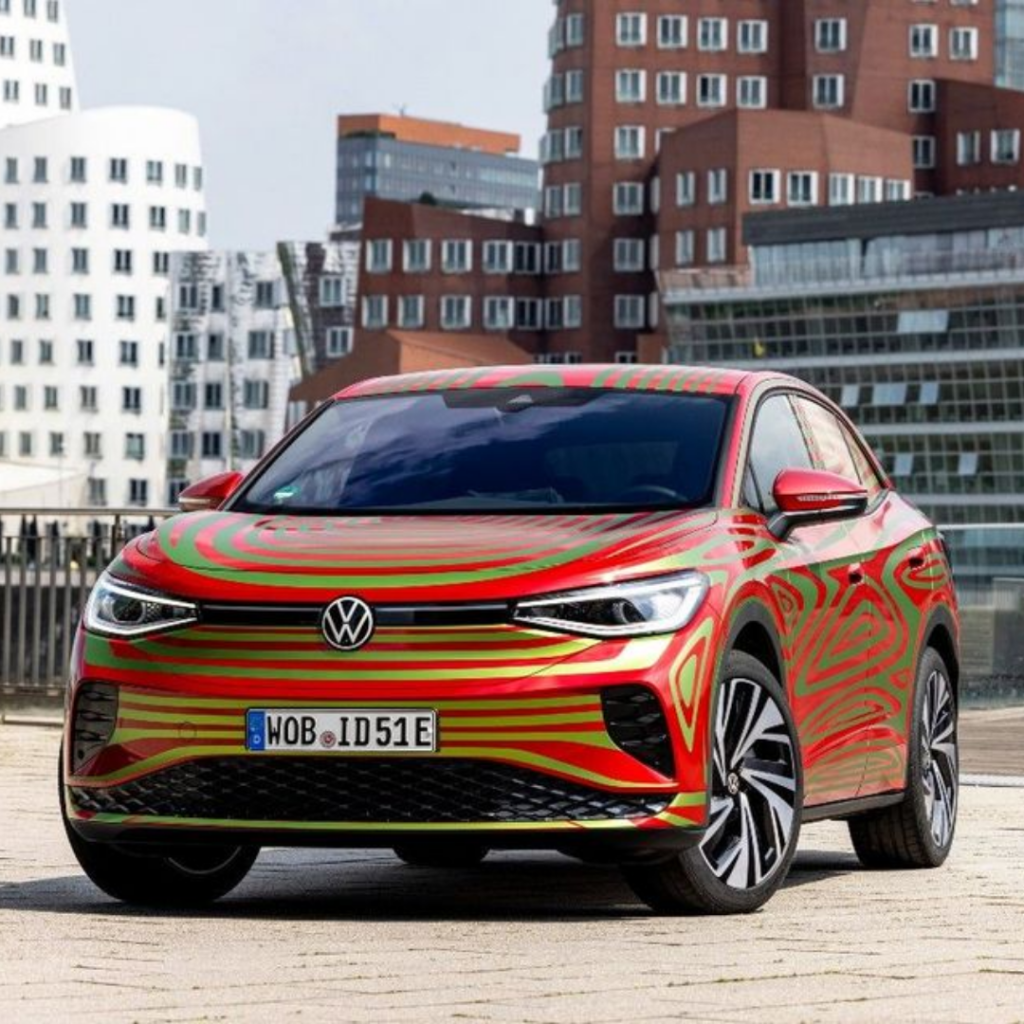 Volkswagen wouldn’t be who they are today without their retro campervan originally launched in the late 1940s. Since then, it’s become one of the most recognisable vehicles across the globe and has had many upgraded models.

Apart from a deep, swept back windscreen and a smooth surfacing, the van itself is unchanged from the concept. However, the production version will heavily draw from their iconic retro van from the 1950s. There are even rumors a classic two tone paint finish will be used as a tribute to the original.

The overall design has been kept minimalistic and clutter free with a simple lower grille and fog light arrangement integrated into the bumper. Fitted with a set of slim-line headlights, joined by an LED running light strip and front VW badge, the ID.Buzz looks the part.

At launch, the ID.Buzz will be available as a passenger carrying model or a commercial van variant. You’ll  have a choice of either panel van or three row passenger van variants, both of which will be available with batteries ranging in size from 11kW to 48kW The larger unit will have a range of around 340 miles. 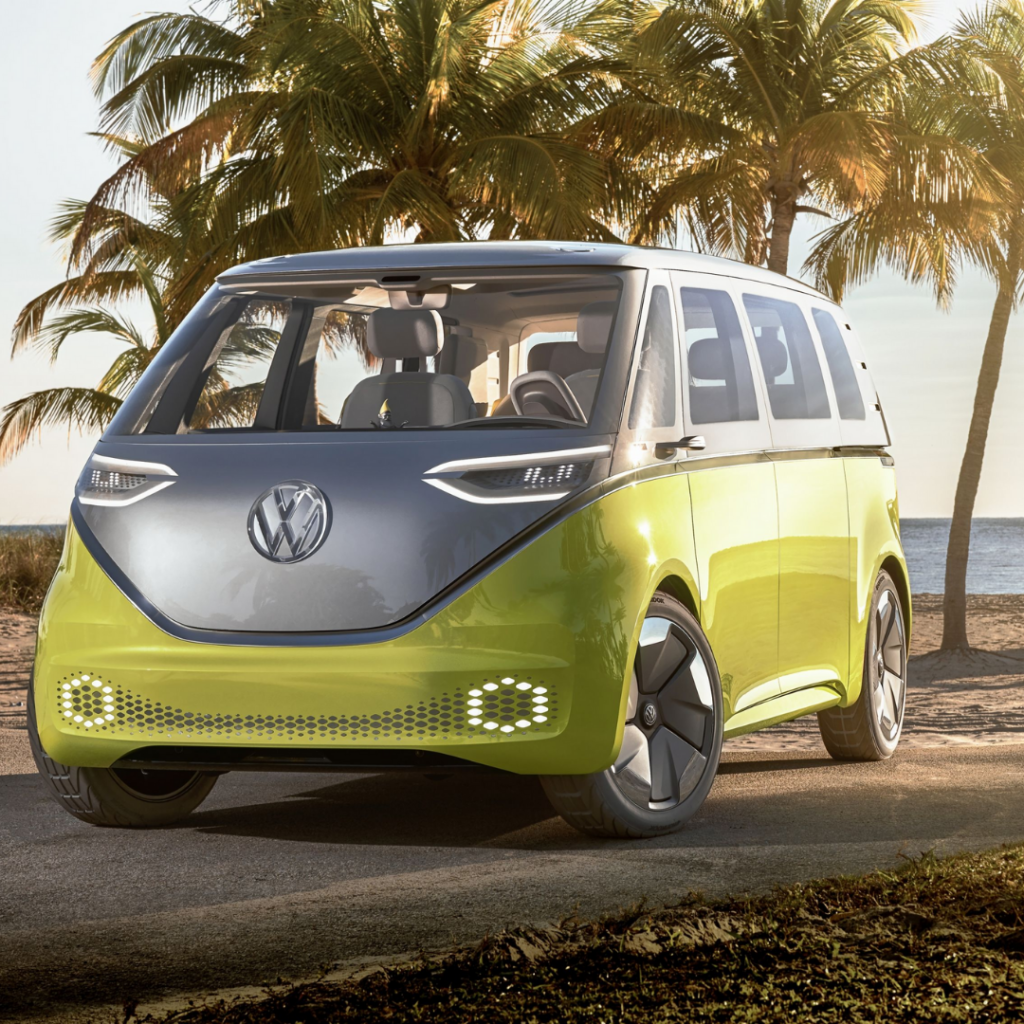 True to its name, the ID.Vizzion promotes Volkswagen’s vision of the future. The design is progressive and intelligent both inside and out. Volkswagen promises the innovative EV will put the driver at centre stage.

So much so that as you approach the vehicle, a facial recognition system sees you and opens the doors. At the same time, the exterior LED light strips welcome you. Plus for extra privacy, the windows and panoramic glass roof can be tinted.

In their plans, the ID. Vizzion doesn’t even have a steering wheel. Instead, all of the controls are virtual. “Drivers’ will need to put on a pair of mixed reality glasses in order to operate the vehicle while the controls are projected right in front of you. 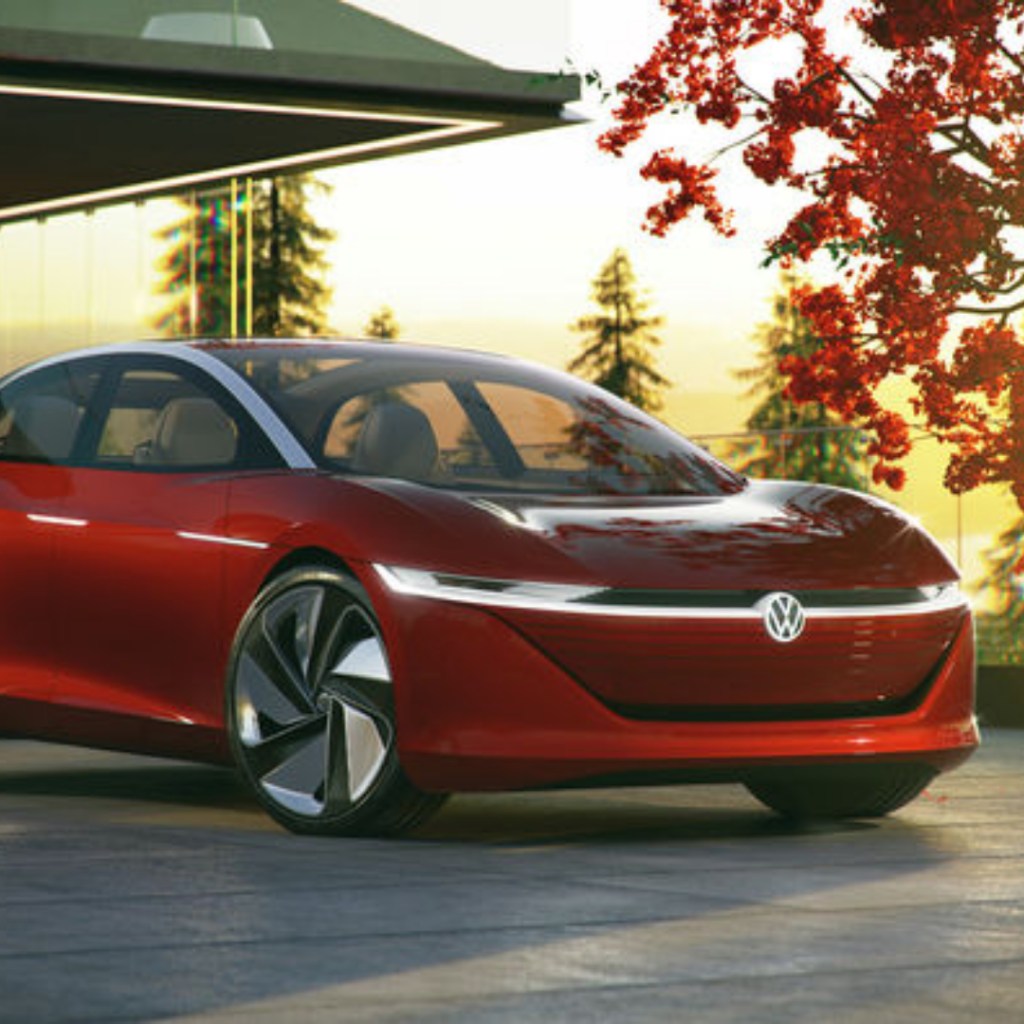 Another groundbreaking commitment from Volkswagen is their dedication to self driving vehicles – which they believe will become a reality by 2025. The ID. Vizzion could be the first vehicle from the manufacturer to be completely autonomous.

Volkswagen’s next all-electric model, coined as the ID.6, is said to be a production version of the ID. Vizzion. However, the manufacturers themselves have not confirmed the design. If true, we could see self-driving, electric cars on the market much earlier than predicted.

The so-called ID.6 is apparently due to launch in the  UK during the final quarter of 2023 and could be offered in both saloon and estate forms. These are also rumors that the model with the largest battery pack (84kW) could provide a range of 431 miles. Plus, the EV could support charging at a rate of up to 200kW, allowing around 143 miles to be added in 10 minutes from a rapid or ultra-rapid charger. But none of this has been officially announced by Volkswagen, so we’re excited to see what happens!

Another concept car from Volkswagen was announced at the Munich Motor Show in September 2021. The ID.Life is definitely the concept car that’s caused the most excitement. Volkswagen are promising to tick every box with this electric car; its small but spacious, has a usable range of 250 miles, is made of sustainable materials and is to cost roughly £17,000.

While it’s being dubbed as one of the most affordable electric cars on the UK market, that doesn’t mean you’re settling on quality, technology or performance. The ID.Life is set to be a four door compact car that is almost reminiscent of the overly cute Honda E. However, as the release date is not until 2025, we’re likely at least two years away from seeing a final product version.

Looking at the car, you can’t help but notice the dashboard, which is completely free of instrumentation and displays. Instead, Volkswagen hopes to have a head-up-display that will project vital driving information onto the windscreen. Otherwise, the centre display is expected to already be in the driver’s pockets in the form of their smartphone. Your smartphone is able to attach to a central phone holder where Volkswagen’s infotainment software can be enjoyed via an app. 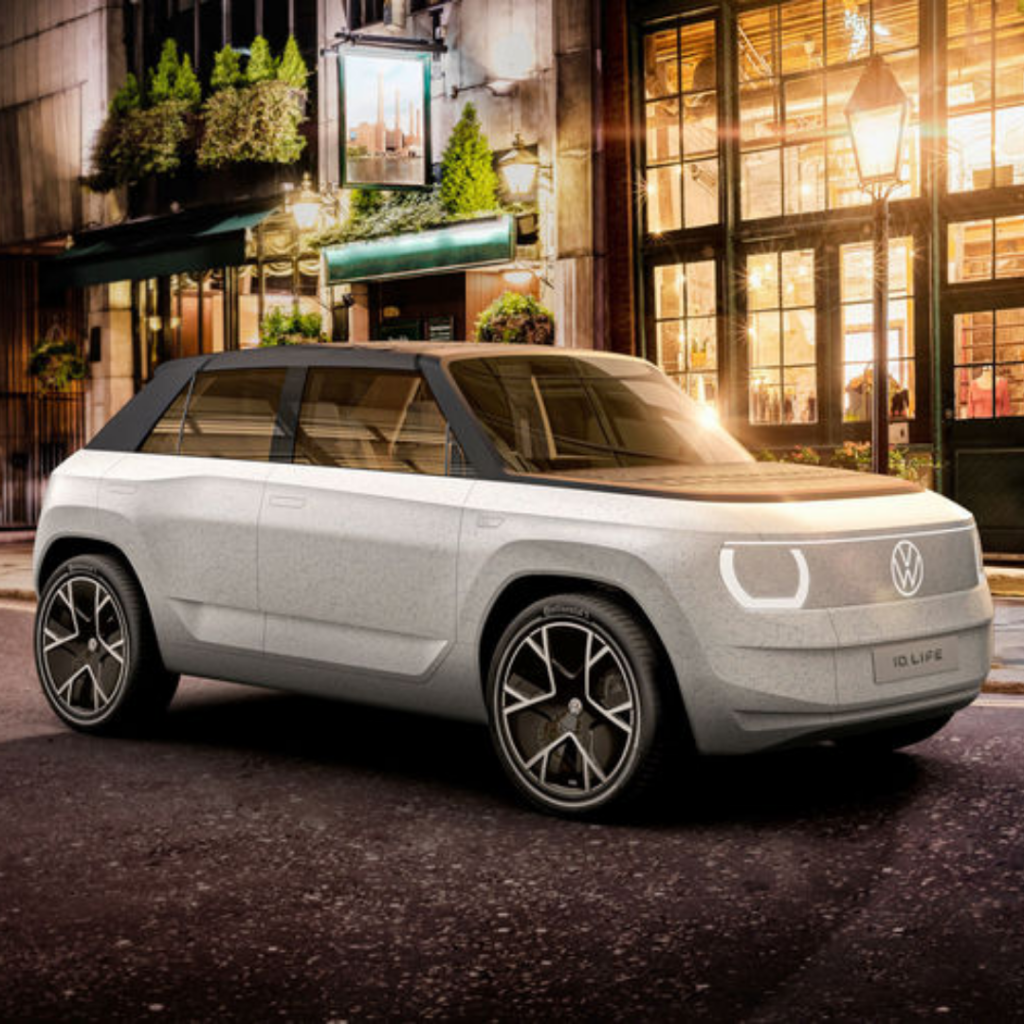 If you think that sounds futuristic, Volkswagen are pushing the boat out even further. Well if you’re thinking of buying the ID.Life for pure comfort and entertainment, then you’d be right. Apparently, Volkswagen plans to introduce an on-board cinema feature which would introduce a projector screen on the windscreen. Ideally, drivers will be able to watch their favourite TV shows and movies while they charge their EV.

Ralf Brandstätter, CEO of the Volkswagen brand, says, “The ID. LIFE is our vision of next-generation fully electric urban mobility.”

Hire one of Volkswagen’s electric cars!

To hire a Volkswagen ID.3, ID.4 or any of our other electric cars please visit our website, here. Feel If you have any additional questions our EV experts will be more than happy to help. Give our team a call on 01634 914 063 or drop us an email to mail@evisionevs.co.uk.

At EVision, we pride ourselves on ensuring we offer the best possible customer service. No matter what type of EV you’re looking for, we’re here for you!

When hiring an EV from EVision, you also get the following benefits: