Are you looking to upgrade your vehicle for one that’s modern and sustainable? Why not lease a BMW i3 from EVision Electric Vehicles today and drive away in style?

Since it’s release nearly a decade ago BMW’s i3 has been a runaway success. As electric vehicles grow within the UK, BMW’s i3 doesn’t seem to be going anywhere. There are now over 22,000 i3s in the UK and over 200,000 worldwide. Built with sustainability in mind, the BMW i3 is a leader in electric motoring and green technology, but is there now a competitor?

Is the captivating Chevy competition?

The updated 2022 Bolt EV hatchback from Chevrolet is finally here and ready to take on the BMW i3 hatchback. Launching back in 2017, the Chevy Bolt has already racked up more than 100,000 sales – the majority of these coming from the US. In order to sustain their hype, the manufacturer is giving the car some upgrades.

Fitted with a 65kWh lithium-ion battery, the 2022 Bolt has a range of an impressive 259 miles. Thanks to the standard fast charging abilities, drivers can add 100 miles in as little as half an hour. However, if you’re using a 7kW charger, like one you’d have installed at your house, it takes a total of 9 hours.

For it’s next release, the Chevy Bolt boasts a redesigned front fascia as well as revised LED front and rear lighting signatures. Plus, the daylight running lights have been positioned higher up, giving the hatchback a more modern look. The small design changes have worked wonders, but the real upgrades are inside.

From the instrument panel and controls to the seats and gear shift level, there are plenty of eye catching changes inside. The 2022 Chevy Bolt has a revamped 10.2-inch touchscreen as the infotainment system. This is accompanied by an 8-inch driver’s display that can be reconfigured to show a variety of details depending on the driver’s preferences. 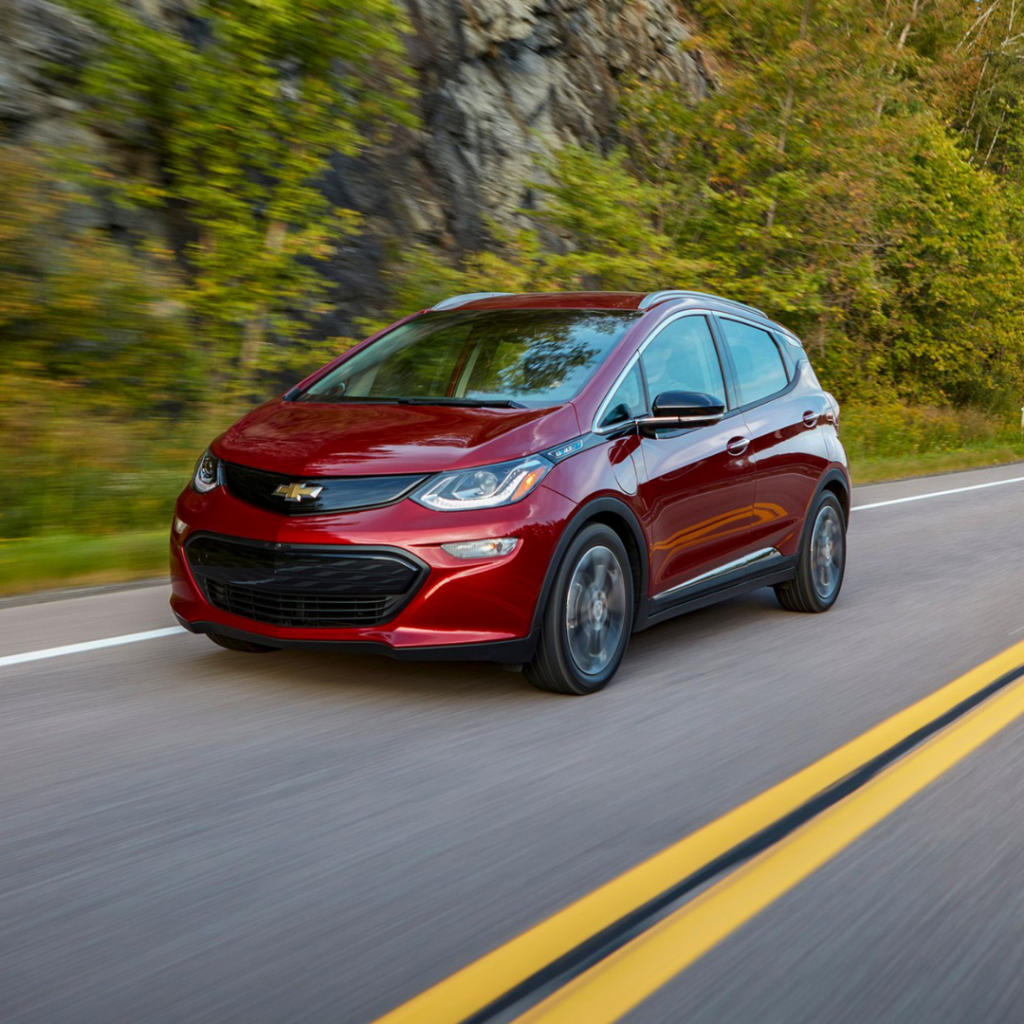 The traditional ‘gear stick’ has been chucked out and replaced with modern pull toggles and push buttons. This frees up a lot more space inside. There’s also a snazzy one-pedal driving button that enhances the regenerative braking by keeping the system active between drive cycles.

You’ll also notice a flat-bottomed steering wheel as well as stunning, roomy seats. Both the front and rear seats have triangular geometric pattern and come with contrasting colour stitching.

Or does the bold BMW take the top spot?

So how does the BMW i3 fair in comparison? Well in terms of stats, the i3 fights its corner – especially considering its a much smaller vehicle with one less seat. The range on a BMW i3 depends totally on the model, however they average at roughly 200 miles.

Thanks to it’s smaller battery, the BMW i3 doesn’t take too long to charge either. You can go from 20% – 80% in a minimal hour when using a rapid charger. That’s bumped up to 4 hours when you’re using a 7kW wallbox. This is considerably low compared to other EV models. Even the Renault ZOE, which is a smaller EV, would take over 6 hours on the same charge. 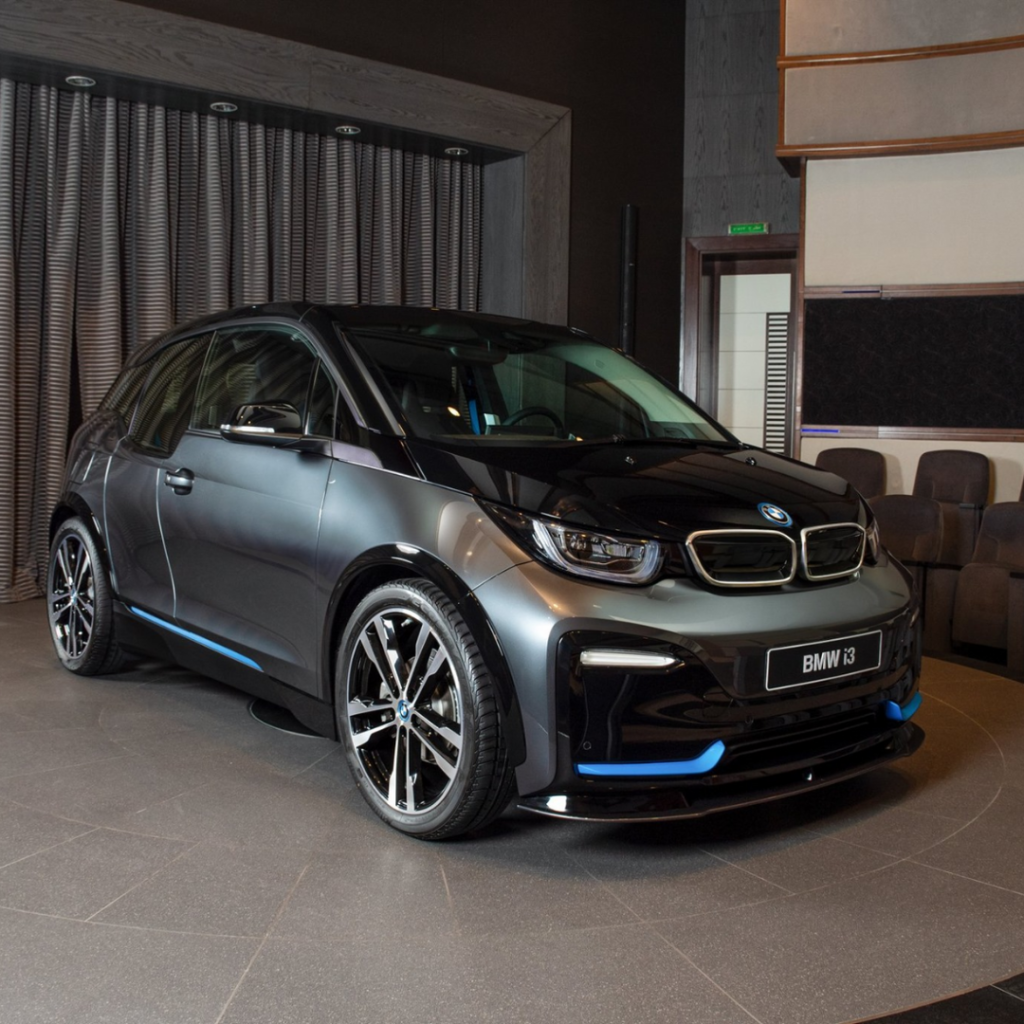 Drivers of the BMW i3 note that it is small enough for nimble towns, but the acceleration is crisp and responsive. The standard model produces 168bhp, while it can reach 60mph in roughly 7 seconds (depending on the exact model).

Inside, the high end look of the i3 continues with the modern styling giving the interior an upmarket ambiance, while it remains roomy enough for four people. In the back, there are two ‘suicide doors’ in replacement of standard rear doors. These open towards the back of the vehicle, creating more space for passengers to get in and out. There’s also extensive glass areas on the rear doors which avoid passengers feeling claustrophobic and the flat floor allows for plenty of foot room.

Thanks to its simple, but elegant, design the dashboard has a futuristic look that is full of high-quality tech. As always, the controls and driving position are up to BMW’s usual high standards.

The central 10-inch display uses the BMW iDrive system which is a huge convenience to drivers.Within this, you can access all the necessary information on parking, charging and the available range of your vehicle. There’s also an advanced voice recognition system as well as Apple CarPlay which ensures you can connect all your smart devices.

All in all, how do the two electric vehicles compare? Is the Bolt EV really competition for the world-leading BMW i3? Let’s take a look!

First of all, the Chevy Bolt does take the upper hand in terms of how far it can travel before needing a charge. A range of 259 miles is certainly impressive. That being said, it is a bigger vehicle than the i3. It’s similar in size to the Kia e-Niro which can travel equally as far.

As the Chevy Bolt is significantly larger, and has a bigger battery, than the i3, it’s obvious that it will take longer to charge. Both vehicles have really good charge capabilities that make them easy for everyday use.

Externally, both cars are superb. They’re both modern and jam-packed with top technology. In this case, it’s all about your taste! Ultimately, we’re sticking with the classic BMW i3. It’s style is unbeaten in the EV world. There’s a reason it’s been a leading vehicle in the development of electric vehicles – and that’s because it’s brilliant!

Plus, the BMW i3 comes with tons of sustainability perks. The BMW Group is committed to challenging the current climate crisis we face and design sustainable, eco-friendly vehicles. 30% of the i3’s interior is designed using kenaf, a regenerative hibiscus plant. As well as creating the i3 to have a recycling rate of 95%. BMW is dedicated to using already recycled materials as much as possible. Those stats are enough to push me to the i3’s corner!

While the Bolt sounds great in concept, it has turned out to slimmer to nothing. Chevrolet unfortunately did not decide to make a right hand drive model for the UK market, and rebranded as the Opel Ampera in the rest of Europe. That’s not all though, the Bolt was actually recalled in September 2021 due to some major fire risks within the vehicle. I think we’ll stick with the BMW…

Lease a BMW i3 from EVision Electric Vehicles

We have the incredible BMW i3 available in two different models; the BMW i3 120AH and the BMW i3 Black. All of our hires come with the following:

Lease a BMW i3 here for a day, week, month or longer and get all of the EVision benefits. Plus a brilliant EV!

Sold on the BMW i3? Our sister company, EV Sales, has lots of BMW i3 models available to purchase and drive away with today! All of their vehicles were previously used as hire vehicles here at EVision. This means they’ve only had one previous keeper, have manufacturers service history and low mileage.