So, you’re wondering why electric cars don’t have multi-gear transmissions? Let’s look into this interesting topic. Most electric cars have a single gear ratio. You probably understand the basic reasons for this, but the math is still super fascinating.

Simply put, it’s one of the biggest differences between electric and conventional internal combustion engine (ICE) cars. It is all to do with the drivetrain (a group of components that deliver power to the driving wheels). An ICE vehicle has a multi-speed gearbox with numerous ratios; nearly every electric car has a single-speed transmission.

After decades of most of us driving conventional vehicles, one gets used to the idea of shifting gears. Multi speed transmissions are an absolute necessity in combination with an internal combustion engine.

First, let’s take a look at why we have multi speed transmissions in the first place. 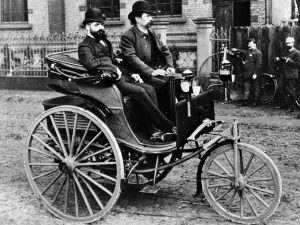 The very first production automobile, the 1886 Benz Patent Motorwagen, had a single-speed transmission and clutch. Then again, its engine generated less than 1 horsepower (hp) and it had a top speed of about 10 mph. Today, with engines pushing 1,000 hp and top speeds over 200 mph, five- and six-speed transmissions aren’t at all uncommon. Automakers are toying with transmissions with up to ten gear ratios. Not to mention that CVT (continuously-variable transmissions) have infinite gear ratios, but why?

The problem is that the ICE vehicles of any kind only generate usable torque and power in a narrow band of engine speeds.

An ICE vehicle, in first gear, can easily accelerate to 30 mph. However, it would also shake itself to bits attempting to accelerate to this speed. Likewise, the same engine would not be able to accelerate from being idle in higher gears, such as fourth or fifth. For instance, if you go much below 1,000 RPM, an ICE vehicle will stall. Go past the redline (where the red is on a tachometer), and the engine will start damaging itself in various ways. For this reason, most modern cars have a “rev limiter” safety feature that cuts fuel and/or spark to stop the engine from going faster and self-destructing. We know, it sounds dangerous.

So what about electric cars?

Of course, this doesn’t mean that electric cars couldn’t have gears, but they aren’t necessary. Unlike an internal combustion engine, it doesn’t need a system to disconnect it from the drivetrain to allow it to rest while the vehicle is stopped.

A key point to note as well is that electric motors have a much larger RPM range than the typical ICE vehicle. Unlike a petrol or diesel engine, an electric motor makes its best power output over an incredibly broad RPM range. We hear you asking, what is RPM? RPM stands for revolutions per minute. It is used as a measure of how fast any machine is operating at a given time. In traditional cars, RPM measures how many times the engine’s crankshaft makes one full rotation every minute. As well as how many times each piston goes up and down in its cylinder.

So instead of packing an EV with numerous gears to keep the engine in its happy zone, EV automakers simply pick a gear ratio that provides a good compromise between acceleration and top speed. With a typical electric motor being capable of sustaining 20,000 RPM, the top speed often isn’t even a limiting factor. As they have few moving parts, they don’t fly to pieces at those speeds.

In addition adding multi speed transmission to an EV would add weight, complexity, friction, and inefficiency to an otherwise simple system. Actually robbing the powertrain of torque, power, and efficiency.

There’s even more that goes into this and Jason Fenske of YouTube’s Engineering Explained goes even further into detail, we recommend that you give it a watch.

This is where multi-gear transmissions get confusing with most modern electric cars. 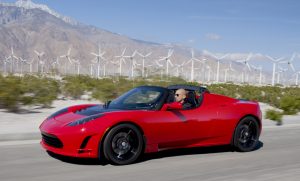 You may or may not know that Tesla originally planned to put a 2-speed gearbox in the original 2008 Roadster. To achieve the best performance, they wanted to have a lower gear for initial acceleration and a higher gear for top speeds.

Tesla’s quest to avoid these nasty compromises kept running into a brick wall, though. At the time the automaker simply couldn’t come up with a multi-speed gearbox that wouldn’t get totally shredded by the sudden onset of torque that a big electric motor can dish out. Abandoning the multi-speed transmission for the Roadster, the Model S “Whitestar” prototype gave them another solution. Better power electronics that could cram in more and more electrons to create an even longer torque curve. Simply meaning that it could allow for more power at speed. The only problem with that approach was that it wasn’t terribly efficient.

Ultimately, Tesla ended up finding another way to have two different gears in their EVs. Their solution; put one in the front and one in the back. Dual-motor Model S, Model X, and Model 3 vehicles all have different gear ratios in their front and rear drive units. At lower speeds, at least half of the power goes to the rear drive unit, which is optimized for lower speeds. When you get up to higher speeds, the electric car’s computers direct power to the front drive unit, which has a better motorway gear ratio.

So, in the end, even Tesla uses multiple gear ratios. Sure, Tesla vehicles don’t have multi-speed gearboxes, but they still show us how multiple ratios can help an EV.

At the end of the day, the era of “city-only” electric cars is coming to an end. People expect their vehicles to be broadly usable in many different environments, and quite rightly so. Customer demands are going to keep the pressure up as automakers strive for new innovation in this field.

Want a Tesla as a company car?

Due to the recent changes to the Benefit in Kind Tax on company cars, you will receive huge savings when driving an electric company car. These changes mean that you could drive a Tesla at zero cost due to electric company cars being exempt from company car tax as of April 6th, 2020. Find out more information by watching the video below.